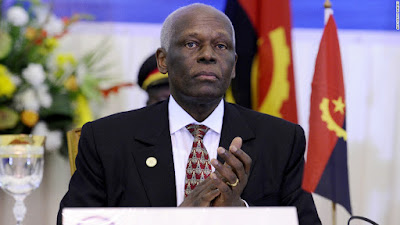 Angolan President Jose Eduardo dos Santos has returned from Barcelona after a "private visit" that came a month after the 74-year-old leader spent several weeks in the Spanish city receiving medical treatment.

Dos Santos, Africa's second-longest ruler, arrived in Luanda late on Wednesday after leaving for Spain on July 3, authorities said, without giving details of his trip or his condition.

It was his second visit to Spain in the last three months.

Foreign minister Georges Chikoti confirmed on May 29, during dos Santos's previous visit to Spain, that he had gone there for medical reasons.


Dos Santos's previous trip sparked speculation over his health, and private media reported that Angola's leader of 38 years had suffered a stroke, although the government declined to comment on his condition.

Dos Santos is due to step down as president, and general elections have been set for Aug. 23.