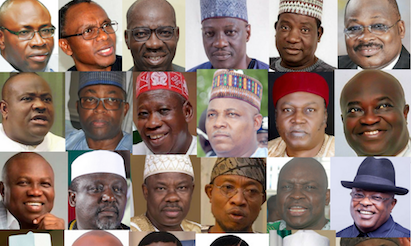 In what may appear to be a tacit support for the restructuring of the country, the Governors Forum last night set up a six man committee to explore the option of actualising state police in the country.

The committee which has representative from the six geo-Political zones of the country was mandated to come up with the best way of policing the country in view of the myriads of security challenges and its attendant lost of lives.

This decision was reached after a closed-door meeting the governors had with the Inspector General of Police, Ibrahim Idris at the Old Banquet Hall of the Presidential Villa.


Briefing State House Correspondents after the meeting, Chairman of Governors Forum and Zamfara State Governor, Abdulaziz Yari flanked by the Imo State Governor, Rochas Okorocha said that its meeting was dominated by the presentation made by the Inspector General of Police.

He also said that the IGP had sought the permission for the establishment of media outfits like radio and television for the Police Force.

Governor Yari said, “We discussed and we received presentation from the Inspector General of Police. He made a presentation to us canvassing for the support to introduce media outfits, radio and television for the force and as well the Police to go technologically from the manual of doing things.

“The Inspector General of Police dominated the whole day of our discussion today understanding what the issue of Police is into the system whereby in some other nations it is ten to one person but in Nigeria we have four hundred to one.

“So, they are having so many difficulties in funding which we are agreed that with the way things are going through the budgeting process, we cannot be able to fund police. So, the Inspector General of Police made us to know that there is a kind of trust fund bill which is before the National Assembly, asked for our support and the members of the national assembly especially the House of Representatives.

“In our own part, we have put a committee in place. It is headed by the governors of Kwara, Imo, Delta, Ekiti, Bauchi and Sokoto to lead the committee so that they can be able to interface with the committee of Police and take the matter before the Acting President for further action. It is important for our nation.

“And as well there is the issue of kind of state police which is being discussed and we coming with so many options which we are expecting the committee will do the and find safe way of policing in Nigeria .”

Also speaking to journalists, the IGP said that security challenges in virtually all parts of the country was the dominant issue in the meeting, stressing that matters that border on security required a collective effort to confront.

He said the essence of the meeting with the governors centered on “Our efforts to address some of the challenges in the Police unit. We had a fruitful discussion with them and obviously all of them are concerned about security in some parts of the country, virtually in all parts of the country. They are ready to support the Police Force to see how we can address some of the challenges.”

On the Acting President’s charge for reinforcements in the security apparatus of the country he said “Obviously it is a normal procedure, when we have challenges we normally reinforce.

“Having insecurity all over the country requires the participation of every citizen of this country. We have to put our heads together to address all the security challenges.

“The governments are doing well, they are trying to bring communities closer and I think it takes a long time but by and large, with the cooperation of community members and all the security agencies we have met to synergies.”