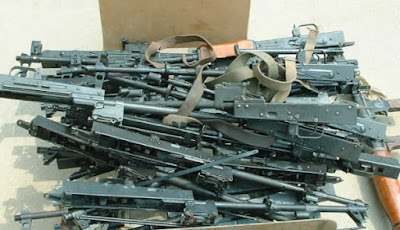 A 19-year-old gun manufacturer, Eric Labari, has been arrested by Operation Safe Haven military task force in charge of security in Plateau and Southern Kaduna.

The Commander of the task force, Maj. Gen. Nicholas Rojas, made the disclosure when he briefed newsmen in Jos on Wednesday.

He said that Labari was arrested when OPSH personnel apprehended one of his customers, Bensahak Nandom.

He said that Nandom was caught on his way to Jos from Mangu where he was going to resell the gun he bought from Labari.


“Somebody was arrested with a pistol and some ammunition and after investigation, he said that he bought it from somebody.

“He has his fabricating machine, his cutters, shapers and so many other things used in fabrication,” Rojas explained.

Labari, who was allowed to speak to newsmen, said that he dropped out of Government Technical College, Bukuru near Jos, when his parents could no longer afford his school fees.

He said that he went into the business without the knowledge of his parents to raise some money.

The gun manufacturer said he designs and manufactures the guns single-handedly.

“I learn the manufacturing of arms from Government Technical College, Bukuru, and I have been in the business for about a year now.

“I manufactured the first single barrel with six shoot sprayers and sold it N11,000 to the person that was arrested and I also sold single barrel at the cost N3,500,” Labari said.

Nandom on his part said that he bought the gun to resell to somebody in Jos who needed it for protection.

The suspect said that he was caught on his way to deliver the gun.