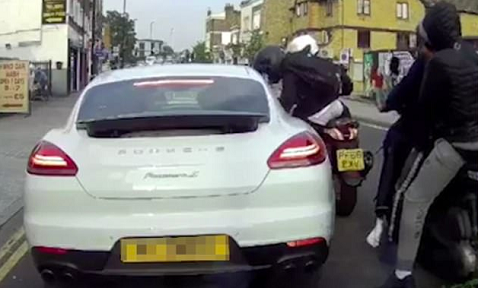 This is the shocking moment a car driver was robbed at knifepoint in broad daylight by a gang of thieves on mopeds.  The incident took place on Ladywell Road in Lewisham, London, on July 6, and was caught on dashcam from a car behind.

Footage shows a white Porsche driver, a man in his 30s, come to a halt in evening rush hour traffic. A motorbike, carrying two men, pulls up next to the driver's window.

The passenger of the bike can be seen holding up a knife at the driver, while his accomplice appears to make demands.

Another moped, with two more people pulls up behind the first one, in an attempt to scare  the driver.


It appears that the Porsche driver hands over his valuables to the bikers, before speeding away from them.

The two scooters then make a U-turn and make off in the opposite direction.

Passersby don't seem to notice what exactly has gone on, as many people just turn their heads towards the incident without doing anything.

The woman in the car of the dashcam can heard shouting at the Porsche driver: 'I've got you on camera. I've got it all on camera.'

The video was posted on Facebook by Gemma Pendley, who wrote yesterday: 'This happened in Ladywell Road, lewisham on 6/7/2017 in broad daylight keep vigilant people x'

A spokesman for the Metropolitan Police has said they are investigating the incident. 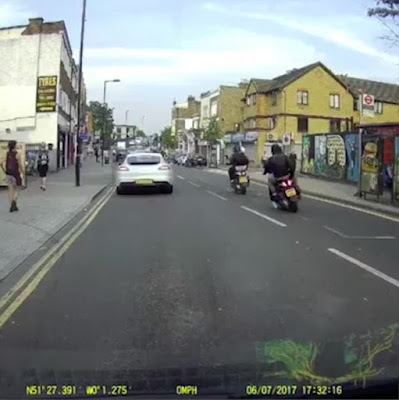 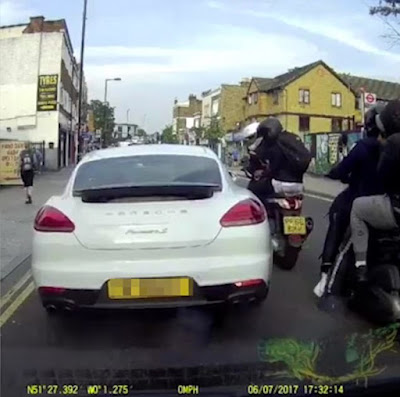