Nigerians Want PDP Back In 2019– Jonathan 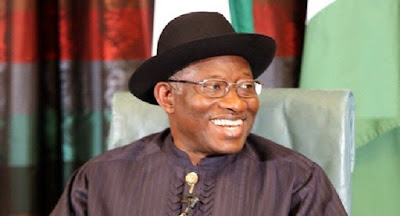 Former President Goodluck Jonathan has said that Nigerians still want the Peoples Democratic Party, PDP, to return to power in 2019. He therefore appealed to the party’s members to rebuild it, Premium Times reports.

Mr. Jonathan said this on Monday evening as he led other party chieftains to a meeting of Expanded National Caucus of the party at its Wadata Plaza national secretariat.

Mr. Jonathan also assured that many members of the party who left it as a result of its internal crisis would return.

The former president, who arrived at the venue to a loud ovation, assured party supporters that the PDP has gone past ‘its worst moment.’


“The first thing we need to do is to rebuild the party because when the party is strong, everything will be added to that.

“Whether you have individual or group interest, as a politician, you must serve. These are very basic things. But first and foremost, we must strengthen the party.

“Let us cooperate with the Caretaker Committee and make sure that PDP is very cohesive. And when that happens, people who stepped aside may step back.’’

PDP had been factionalised since its national convention which held in May 2016 in Port Harcourt leading to numerous court cases that ended last week at the Supreme Court.

With the affirmation of Ahmed Makarfi as its authentic chairman by the apex court, the crisis that had ravaged the party was finally laid to rest.