Janet Jackson Carries Napping Baby Eissa While Out In LA

Janet Jackson Carries Napping Baby Eissa While Out In LA 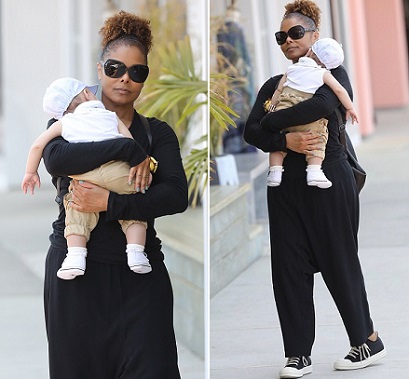 She is getting ready for her North American tour which kicks off in a month-and-a-half. And no doubt Janet Jackson is getting all the bonding time she can with her little man.

The 51-year-old singer was spotted carrying a napping baby Eissa while out and about in Los Angeles yesterday.

Janet looked in incredible shape for welcoming the child just six months ago as she sported a comfortable all-black outfit. She wore a sweater and harem pants combination along with matching shades.


Her brunette tresses were put up in a bun as she let her evergreen looks by going make-up free.

Back in May, she announced that she would be hitting the road for the State Of The World Tour.

The 56-date tour features stops throughout the US and Canada as it kicks off in Lafayette, Louisiana on September 7 and concludes December 17 in Atlanta, Georgia.

She is currently in the midst of a divorce from Eissa's father Wissam Al Mana and previously said the divorce was 'in God's hands'.