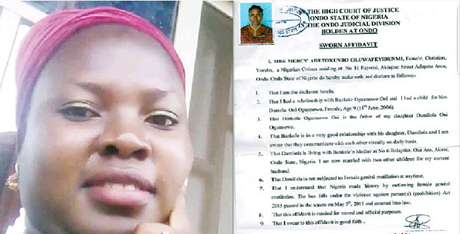 A local government worker, Mercy Oluwafeyibunmi, has been arrested by the police and detained at the Force Criminal Investigation and Intelligence Department (Annex), Alagbon, Ikoyi, Lagos State.

It was gathered that the woman, who had been in detention for two weeks, had also been admitted to the police clinic at Alagbon after falling ill.

Punch Metro gathered that the offence of the mother of three was that she bore the same middle name, Adetokunbo, with one Eileen, a Nigerian based in the United Kingdom. Punch correspondent gathered that Eileen sent a representative to an Ondo State High Court, who swore to an affidavit, claiming that Mercy’s middle name was “imposive.”


Mercy, 35, was subsequently arrested and detained at the Force CIID Annex, Alagbon, since July 7.

Investigations by Punch Metro, however, revealed that Mercy and Eileen’s differences were beyond a middle name.

The two women’s ex-lover, Bankole Ogunnowo, who is based in the UK, was at the centre of the conflict.

Punch correspondent gathered that Bankole and Mercy had a brief relationship in Nigeria in 2006, which produced a baby girl, named Damilola.

Bankole later married Eileen and they both relocated to London, UK, where they also had a child together before they broke up.

Eileen, while allegedly seeking sole custody of their child, told a London court that her estranged husband was not to be trusted with children because he performed Female Genital Mutilation (FGM) on Damilola, the child he had with Mercy.

Mercy, who got wind of the allegation, deposed to an affidavit, dated November 27, 2015, clearing Bankole of the charges.

In the affidavit, which revealed her name as Mercy Adetokunbo Oluwafeyibunmi, she stated that FGM was also a criminal offence in Nigeria.

However, one Oyebo, who acted for Eileen, swore to a counter-affidavit before an Ondo State High Court, accusing Mercy of stealing Eileen’s name.

Bankole told Punch Metro that the accusation  was the beginning of Mercy’s ordeal.

He said, “Eileen denied me access to the child she had for me in the UK. I went to court so I could take my child out once in a while despite our separation. But she told the court that I belonged to a gang in Nigeria called OPC, and that we kidnap children to do FGM for them.

“She said I did that for the daughter that Mercy had for me in Nigeria. It became a concern to the UK authorities because I also work with children here (UK). I contacted Mercy and asked if I did that for my child and she said no. I asked her to swear to an affidavit, which she did. The affidavit was sent to London.

“Eileen alleged that Mercy stole one of her names in order to bring my daughter, Damilola, to the UK.”

Punch Metro learnt that the counter-affidavit by Oyebo was given to the Commissioner of Police in charge of Interpol, CP Olushola Subair.

The commissioner was reported to have written the London court, saying Bankole  and Mercy were being investigated.

After Bankole won the court case against this ex-wife in February 2017, some individuals were alleged to have threatened Mercy for her role in the matter.

The woman allegedly got a Federal High Court’s injunction forbidding any harassment.

However, despite the injunction, she was arrested and taken to the FCIID, Alagbon.

Mercy’s husband in Nigeria, Nicholas Oluwafeyibunmi, with whom she had two children in Akure, lamented that his wife was being harassed for the assistance she rendered to Bankole.

He said, “On the day she was arrested, she wanted to pick our child at school. A man called my wife that he wanted to see her at a place.

“When the call became intense, I decided to follow her, together with another friend. The caller brought out the Whatsapp picture of my wife and asked if she was the one. We didn’t know he had called the police.

“Suddenly, some policemen from the Ondo State Police Command came in and took her to the Yaba Police Division. They later sent a signal to those at Alagbon, Lagos, who came to take her away. Since then, she had been held incommunicado. I don’t know why they picked my wife. She did not commit any crime.”

Mercy, who spoke with Punch correspondent on the telephone on Monday, said she had been admitted to the police clinic after she fell ill.

She said, “They said my crime was that somebody in the UK, who I did not know, said I stole one of her names. My name is Mercy, Joy, Adetokunbo. Why will steal her name?”

She said, “When I gave birth to her, I named her Anu, Joy. She had up to 10 names given by different relatives. Her father, who was away, came back and gave her Adetokunbo. For the past two weeks, I don’t know where my daughter is. Please help us.”

Eileen’s father, Jimi Odumosu, did not pick his calls when Punch correspondent called him on Monday.

However, in a recorded conversation he had with Bankole, which was obtained by Punch Metro, Odumosu urged a peaceful resolution of the matter, saying he was separated from Eileen’s mother and he was not sure if she (Eileen) would listen to him.

The Deputy Commissioner of Police in charge of the FCIID, Alagbon, Mr. Abutu Yaro, confirmed that the suspect was in custody.

He, however, said he did not know the details of the case.

He said, “That case was investigated by Interpol Lagos and was sent to Interpol Abuja. The Interpol Abuja then wrote a note on the case file that the police lawyer attached to General Investigation, FCIID, should take the matter to court.

Eileen did not pick her calls as her phone rang out severally, while a text message sent to her line had yet to be responded to as of press time.

The Force Public Relations Officer, Moshood Jimoh, had also yet to respond to a text message from Punch Metro.