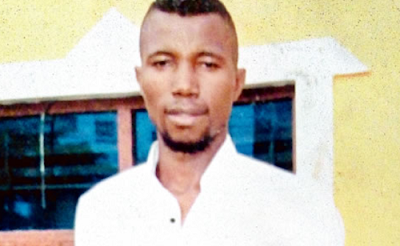 A man, Chibuzor Nwafor, has been arrested for stabbing his friend and neighbour, Amarana Chikezie, to death following a disagreement over power connection at their residence in Kado-Kuchi behind Next Shopping plaza, Jabi, Abuja.

The incident, which occurred around 10pm last Sunday, has thrown the neighbourhood into mourning.

Amarana, 23, a graduate of Community Development from Enugu State University of Science and Technology, was certified dead on arrival at the Gwarimpa General Hospital.


Amarana’s elder sister, Precious, told Punch correspondent on Sunday that the deceased was stabbed in the heart leading to his demise shortly after.

She explained that Nwafor and her brother were friends, stressing that the murder of Amarana was premeditated.

She said she was informed by eyewitnesses that Nwafor had asked her brother to meet him at home so they could resolve an issue bordering on the illegal power connection by a new neighbor, who was said to have been sanctioned by Amarana.

Precious said, “Chibuzor phoned my brother to come back home so they could talk about the power supply extended to a new neighbour by Amarana.

“In the course of their discussion, they started quarreling and they were prevented from fighting by those present.

“The next thing that Chibuzor did was to enter his room and got a knife which he hid so that the others would not see it; he then stabbed my brother in the heart.

“I don’t know why he would kill somebody he ate and drank with. I believe he planned the murder all along, but he must tell the world why he did this.”

A common friend of both Amarana and Chibuzor, who spoke on condition of anonymity, explained that the deceased was planning to join the Nigerian Air Force before his death.

Narrating how Amarana died, he said that the deceased was rushed to a pharmacist after he was stabbed, who declined to treat him unless there was a police report.

He said, “We then decided to take him to Gwarimpa General Hospital, but we couldn’t get a vehicle on time. For about 20 minutes, we were looking for a cab while we kept him in front of the chemist shop.

“It was a man who was going to a church vigil that took him to the hospital, but the doctor said he died five minutes after he was stabbed, adding that there was no way he could have survived because the knifed penetrated his heart.”

He further stated that Chibuzor was tricked to the hospital where he was arrested by policemen who were waiting for him.