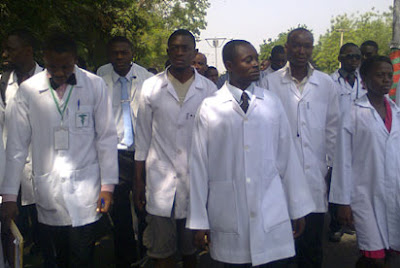 A medical doctor Dr. Okafor Ikechukwu was on yesterday arraigned before an Enugu Magistrate Court for unlawfully confining and detaining mother and child in his private hospital located in Abakpa area of the state capital for a year and four months.

Dr. Okafor who also work at the University of Nigeria Teaching Hospital, UNTH Ituku Ozalla was charged to court for keeping the nursing mother Chiamaka Ogbodo, and her baby Kosisochukwu shortly after his delivery and against their will.

The charge further read that “you Dr. Ikechukwu Okafor from April 2016 to 8th day of July 2017 at Divine Grace Hospital and Maternity situate at No 10 Nsude Street Garki Awkunanaw Enugu, in Enugu South Magisterial District, did unlawfully confine and detain one Chiamaka Ogbodo and her child Kosisochukwu against their will.”


He was therefore accused of depriving them of their personal liberty and thereby committed an offense punishable under Section 316 of the 1999 Criminal Code, Cap 30 volume. The doctor however pleaded not guilty to the charge and was granted bail at the cost of N100,000 by presiding magistrate A.O.Eze.

Speaking to newsmen at the end of the court session the National Publicity Secretary Campaign for Democracy, CD, Dede Uzor Uzor who reported the matter to the police expressed dissatisfaction with the way the police was handling the matter.

“Yes the police tried to play a first one by not informing the complainants that the accused was to be arraigned. They also refused to include other charges such as attempted rape and the accused refusal to immunize the baby while in detention thereby exposing him to danger.

“We have lost confidence in the Garki police who are prosecuting the matter and hereby call on the Enugu commissioner of police to step into this matter and ensure that justice is done.” He disclosed. The case has been adjourned to August 1st for trial.