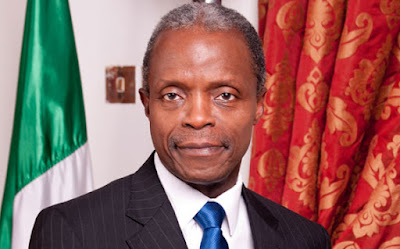 The acting President, Prof. Yemi Osinbajo, has said that the Federal Government is working assiduously to solve the challenge of epileptic power supply in the country, in order to boost the manufacturing sector of the economy.

He said this on Thursday at Ososa, Ogun State, during the facility tour of an indigenous company, Rite Foods Limited, which produces sausages and beverages.

Osinbajo, who spoke with journalists after the tour, allayed the fears of manufacturers about power supply, promising that the Federal Government was working at resolving the nagging problem of poor power supply.


He, however, commended the management of the company for producing products that could compete globally with locally sourced materials.

The acting President said he did not believe there was a problem of trust with goods manufactured in Nigeria.

He said he was proud of genuine local investors with a high sense of patriotism and the spirit of hard work and entrepreneurial development.

He said, “I don’t think there is a problem of trust for a world class product. This is a great enterprise; we have seen that the product is all over the country.

“There are few problems, such as power and all of that, which we hope are going to be resolved.

“This is a classic example of the Nigerian spirit of hard work and entrepreneurship.”

Osinbajo later attended the 7th edition of the Federal Government Micro, Small and Medium Enterprise Clinics for Viable Enterprises, held in Abeokuta, where he highlighted some of the government’s policies on economic development.

Addressing small and medium scale businessmen in Abeokuta, Osinbajo disclosed that the Federal government would soon open a one-stop shop for all the regulatory agencies in Ogun State to stimulate economic growth.

The Managing Director, Rite Foods Limited, Mr. Seleem Adegunwa, said the company was faced with the challenge of power supply, as it was not connected to the national grid and had to run on generators.

He said the high cost of power generation had eaten into the company’s profit, adding that despite that, it was competing favourably in terms of product quality.

He said, “We have provided employment for over 1,000 people directly and so many others indirectly.

“Since the company came to this community, it has brought unprecedented economic growth to the area and has also reduced crime rate.”