PDP Now In The Hands Of Looters – Sheriff

PDP Now In The Hands Of Looters – Sheriff 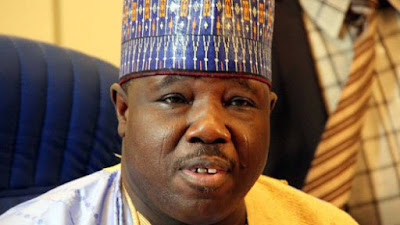 Former National Chairman of the Peoples Democratic Party, Senator Ali Modu Sheriff, has said that the party has been returned to those he described as treasury looters.

He also denied media reports  that he had congratulated the Chairman of the party’s National Caretaker Committee, Senator Ahmed Makarfi, over his victory at the Supreme Court on Wednesday.

He denied having any Twitter account, where the alleged message was taken from. The Supreme Court had in its judgment, upheld the constitution of the caretaker committee and endorsed the removal of Sheriff at the party’s national convention, held in Port Harcourt, Rivers State, in May 2016.


The judgment, therefore, ended the 14-month battle for the leadership of the party, which was the country’s ruling party from 1999 to 2015. The crisis in the party led to the defection of some of its members to other parties, and during the time the leadership tussle was going on, it lost the governorship elections in Ondo and Edo states to the All Progressives Congress.

The spokesperson for the Makarfi-led committee, Prince Dayo Adeyeye, had on Thursday said it was offering Sheriff and his group “amnesty”, adding that nobody would be punished for the loss which the party had suffered since the beginning of the crisis. He, however, warned that the party would not condone further negative actions by Sheriff and his group.

But Sheriff, who spoke through the spokesperson for the National Working Committee sacked by the Supreme Court, Mr. Bernard Mikko, said it was wrong for the Makarfi-led caretaker committee to have said the PDP would grant him and members of his former executive committee “amnesty”.

Others in Sheriff’s camp include the party’s former National Secretary, Prof. Wale Oladipo; Sheriff’s deputy, Dr. Cairo Ojougboh, and some members of the National Assembly.

The Sheriff-led faction also had the support of some state chapters of the party and some governors.

Mikko, in a message sent to our correspondent, described Adeyeye’s statement as reckless, saying that “amnesty” ought to be given to those who had committed offence against the party.

He said that Sheriff and his group did not occupy the national secretariat of the party illegally, adding that the party belonged to all.

He said, “I take exception to the reckless statement credited to Prince Dayo Adeyeye, suggesting that amnesty has been granted to Senator Ali Modu Sheriff, his National Working Committee and supporters. Amnesty is a reprieve for those who have committed offence under our statute.”

According to Mikko, Sheriff and his camp were forced to vacate the party’s national secretariat by the police.

He said, “However, the office was officially reopened for us after we presented the Certified True Copy of the judgment of the Court of Appeal, Port Harcourt Division, to the Inspector- General of Police.

“I am, therefore, concerned about the future of our party in the hands of some of those who are known to have pending criminal cases, bordering (on) fraud, treasury looting and dishonesty, with the Economic and Financial Crimes Commission.

“The Supreme Court of Nigeria is the highest court in our land and we await the copy of the full judgment delivered on July 12, 2017.

“No one owns the party and those making unguarded and reckless statements in the public domain should realise that the solution to the problem of Nigeria is beyond any political association. Unacceptable and unjustifiable means cannot lead to a justifiable and acceptable end.”

He said, “For the avoidance of doubt, Senator Sheriff does not have or own a Twitter account and could not have tweeted any message.

“We, therefore, view the said message as fake and mischievous and should be regarded as that of evil doers.

“We further warn all mischief-makers to desist from trying to exploit the huge political capital of Senator Sheriff for selfish gains.”

In its reaction, the Makarfi-led committee said it would no longer allow Sheriff and his group to distract it, adding that it would henceforth devote its time to building the party.

It also said its time would be spent constructively criticising the APC-led Federal Government.

Adeyeye also said the PDP no longer had factions.

He said, “I will no longer engage them. Supreme Court is the final arbiter and it has pronounced that there is no faction in the PDP.

“We have done the right thing by offering our hands of fellowship to them. We won’t engage them any longer because we are now one.”