A Dozen Killed, Over 40 Wounded In Cameroon Suicide Bomb Attack 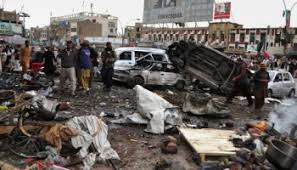 Two suicide bombers killed at least 12 people and wounded over 40 others in a small town in northern Cameroon near the Nigerian border late yesterday, a senior army source said.

"There were 14 deaths, including the two suicide bombers, and 42 wounded," said an army colonel responsible for evacuating the wounded who asked to remain anonymous. "The attack was perpetrated by one suicide bomber, and the other was shot dead."

The attack was carried out by two women who walked into a busy area in the center of Waza, five miles (8 km) from the Nigerian border, said Midjiyawa Bakari, the governor for the Far North region where the attack took place. He said that 13 had been killed and 43 wounded. A baby was among the dead, he said.

Many were seriously wounded and were flown to nearby hospitals, he said.