Pictured! Nigerian Jailed For Almost $1m Fraud In US

Pictured! Nigerian Jailed For Almost $1m Fraud In US 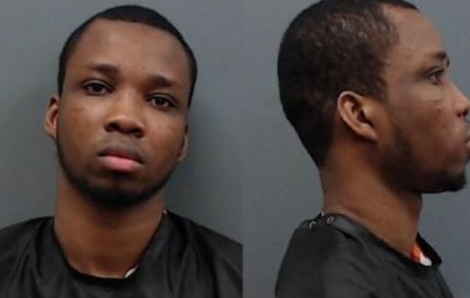 When Delta Airlines international flight 9348 landed in November 2016 in New York, federal agents were waiting at the gate to arrest a Nigerian man accused of bilking East Texans and others out of nearly $1 million.

Fawaz Olarenwaju Animasaun, 27, is one of two people named in a federal indictment for charges of aggravated identity theft and conspiracy to commit bank fraud, as well as aiding and abetting.

He was traveling to the U.S. from Ghana, by way of Amsterdam, when he was arrested at the airport.
Just a few weeks later, the 7-foot-1-inch tall Nigerian was an inmate at the Gregg County Jail
awaiting his turn in a federal courtroom.

Under a plea agreement finalized in May, Animasaun is serving three years in prison on the conspiracy charge. He is ordered to pay $930,737.60 in restitution to three financial companies.


Court documents show Animasaun will pay $135,989 to  East Texas-based Austin Bank as part of that restitution.

Animasaun and his alleged accomplice Idowu Temitope Omolade, also from Nigeria, are believed to be involved in at least 21 fraudulent wire transfers between April and August of 2012.
And that may not be all.

A rare footnote made by a U.S. Attorney in the 21-page federal indictment reads, “Because the purpose of this complaint is to set forth only those facts necessary to establish probable cause to arrest, I have not described all the relevant facts and circumstances of which I am aware.”

The indictment says the purpose of the conspiracy was to “… unlawfully obtain money through unauthorized transfers of funds from bank accounts and brokerage accounts.”

To do that, the Nigerian men allegedly impersonated actual account holders in emails exchanged with banking and financial services personnel. In those email conversations, the indictment says the suspects “… harvested details about the target accounts, including account balances, and obtained wire transfer instructions.” With those details, the suspects were then able to initiate a wire transfer without the account holder’s knowledge or authorization.

The indictment said that the money was moved through a series of accounts using “money mules,” or people who may or may not have known they were assisting in the transfer.

Animasaun was transferred out of the Gregg County Jail on June 28, in the custody of the U.S. Marshals. Federal Bureau of Prisons records show he is now in a detention center in Brooklyn, New York, and will remain there until June 2019. He could have received up to 30 years in prison for each count of the indictment.

The indictment states that Animasaun kept Omolade informed of the progress, and told him when to expect specific wire transfers. Omolade is not listed as a federal inmate, and there is no record of an arrest. Aliases listed in the indictment include “Michael Chernick” and “CLICKIDONLINE.”

Animasaun is listed in the indictment with four aliases, including “Larry Hoover” and “Slim Husstle Olanraywaju.”