We Voted Buhari President When He Faced Diminishing Return- Fayose 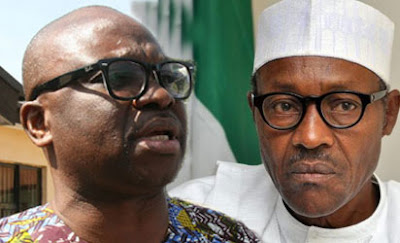 Ekiti State governor, Ayodele Fayose, yesterday in Benin declared that Nigerians made a grave mistake by voting President Muhammadu Buhari into office saying that the president had reached a stage of diminishing return when he was voted into power.

He said that most of the people that voted President Buhari did not even know him or assess his capacity for the office, but were brainwashed to vote for a change that has now become a cause to Nigerians.

Governor Fayose also admitted that he was a controversial person because he did things other people dreaded to do.”I am controversial because I am doing things others are not doing because they lack the courage and are afraid.


Controversy is necessary in a democratic setting , and we must be courageous enough and if you are not controversial, then you are afraid” Speaking in Benin while delivering the convocation lecture of the Benson Idahosa University (BIU), the governor said the time for young Nigerians to pilot the affairs of the nation was now, adding that under his watch, nobody above the age of 50 would become a council chairman while the maximum age for a councillor would be 35.

He said, “You can only give your best at your best. Our president is at diminishing return as at today. I should be quoted.

“We cannot all sleep and face one direction. Idahosa did not do these things when he was close to his grave; he did them at his prime when he had the energy to make a difference.

“How do you give laptop or I-pad to a seventy-something year’s old man? How can we continue to struggle with our sons for positions meant for them?”

On the call for the restructuring of the country, Governor Fayose said past leaders have been paying lip service to the issue, saying that “ the restructuring should be in such a way that every nation that makes up this country must be respected for what they are”