Trump, Putin Meet For The First Time At G20

Trump, Putin Meet For The First Time At G20 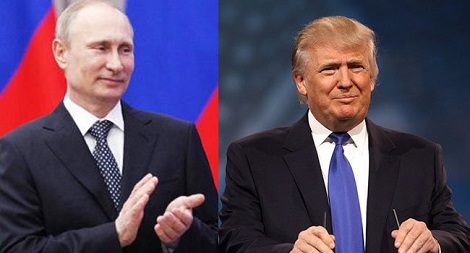 U.S. President Donald Trump and Russian President Vladimir Putin, a veteran businessman and a former spy, meet in person for the first time today in the most highly anticipated encounter on the sidelines of the G20 summit.

Trump has said he wants to find ways to work with Putin, a goal made more difficult by sharp differences over Russia’s actions in Syria and Ukraine, and allegations Moscow meddled in the 2016 U.S. presidential election.

That means every facial expression and physical gesture will be analyzed as much as any words the two leaders utter. The Kremlin said the two enjoyed a passing handshake at the summit ahead of the talks later in the day.


“I look forward to all meetings today with world leaders, including my meeting with Vladimir Putin. Much to discuss,” Trump wrote in a tweet today. “I will represent our country well and fight for its interests!”

The meeting is scheduled for 3:45 p.m. local time, shortly after a G20 working session on climate and energy begins.

Trump, who has angered world leaders with his decision to pull the United States out of the Paris accord on climate change, will likely have to leave that session early to make the Russia meeting.

Some fear the Republican president, a political novice whose team is still developing its Russia policy, will be less prepared for their sit-down than Putin, who has dealt with the last two U.S. presidents and scores of other world leaders.

“There’s nothing … the Kremlin would like to see more than a (U.S.) president who will settle for a grip and a grin and walk away saying that he had this fabulous meeting with the Kremlin autocrat,” Representative Adam Schiff, the top Democrat on the House of Representatives’ Intelligence Committee, said in an interview on MSNBC.

As investigations at home continue into whether there was any collusion between Trump’s presidential campaign and Russia, the U.S. president has come under pressure to take a hard line against the Kremlin.

Moscow has denied any interference and Trump says his campaign did not collude with Russia.

On Thursday, Trump won praise from at least one Republican hawk in the U.S. Congress after his speech in Warsaw in which he urged Russia to stop its “destabilizing activities” and end its support for Syria and Iran.

“This is a great start to an important week of American foreign policy,” said Republican Senator Lindsey Graham, who has often been critical of Trump on security issues.

But earlier in the day, Trump declined to say definitively whether he believed U.S. intelligence officials who have said that Russia interfered in the 2016 election.