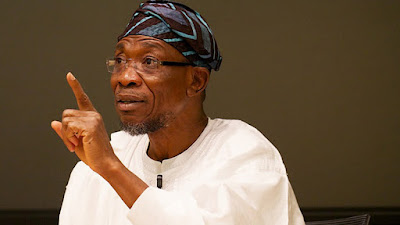 The Osun State Governor, Mr. Rauf Aregbesola, has said Dr. Deji Adeleke may have gone mad because of the death of his brother, Senator Isiaka Adeleke.

Aregbesola said this in Ede yesterday at the campaign of the candidate of the All Progressives Congress in the Osun West Senatorial District by-election holding on Saturday.

The governor’s vituperation was in reaction to allegation that he owed Deji Adeleke money.

But Aregbesola said he did not borrow any money from Deji at anytime, saying it was the Adelekes that had been collecting money from him.


He said, “Deji Adeleke is a business man, he is not a politician but it is like his brother’s death has run him mad.” (O dabi pe iku egbon e ti da lori ru). It is a lie that I borrowed money from Deji,

“It is to the glory of God that they got the Certificate of Occupancy of their university from our government. Why didn’t those who are their new friends give them C of O of that university? If Deji Adeleke had so much money, why did he beg me to waive the payable tax of his university? Why couldn’t he just pay?

“I am bold enough to say this over and over again, because I have never sought assistance from any member of the Adeleke family, even during the lifetime of Senator Isiaka Adeleke. Nothing of such occurred.

“My relationship with the late Adeleke was cordial and beyond politics because we had known each other even before Osun politics, because our residences were adjacent to each other in Lagos State.”

He said political office was not by inheritance, saying if it was so, Bola Ige family would have been ruling the state.

In a related development,  the National Chairman of the PDP, Ali Modu Sherif, on Wednesday stormed Apomu, the headquarters of Isokan  Local Government Area  to lead the campaign for Chief Ademola Adeleke, who is the standard bearer of the  party in the Osun West Senatorial District by-election.

A former Deputy Governor of Osun State, Iyiola Omisore, who recently joined hands with the Sheriff faction of the PDP in Osun State, was also one of the prominent leaders of the PDP, who campaigned for Adeleke.

The campaign train of the PDP, after leaving Apomu,  headed for Iwo in continuation of the electioneering.

Meanwhile, one of the election observer groups, accredited to monitor the election,  Centre for Credible Leadership and Citizens Awareness, has said there may be voter apathy due to the threat being issued by some politicians ahead of the poll.

The Director-General of the CLCA, Dr. Gabriel Nwanbu, said this at a press conference in Osogbo on Wednesday.