Fcck Boy! Jeremy Meeks’ Wife Denies Him Access To Their Home After He Returns From Romance With Topshop Heiress 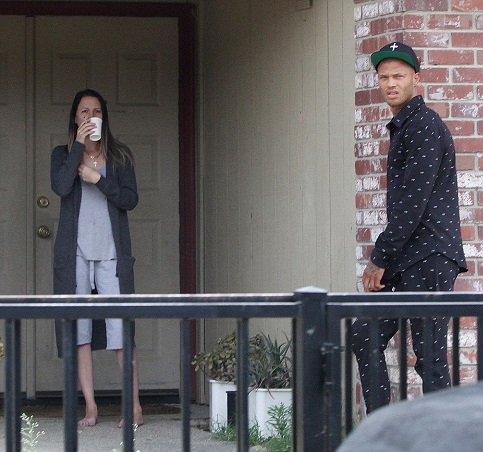 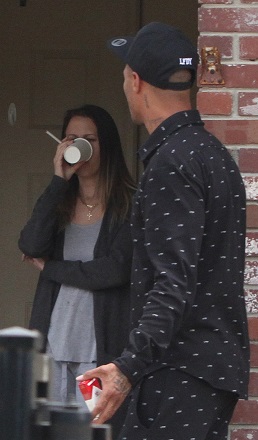 God bless women like Melissa. You go on to have a show on a yacht and think you still have a home here? NO! Hahaha thank you Melissa for making part of my morning, hahaha you have no home here, she tells him, lol.

So Hot felon Jeremy Meeks has returned home to face his betrayed wife Melissa at their modest northern California home.

Meeks, 33, touched down in the US on Monday night following a week which saw him romancing heiress Chloe Green on a yacht off Turkey.

Now photos exclusively obtained by DailyMail.com show him arriving at the $317,000 home he shares with Melissa, 38, and their three children in Manteca, California.

Dressed in navy blue polka dot pants and a matching shirt, Meeks was seen shuttling a pile of luggage into the house from a truck parked outside.

But his welcome appeared less than warm – possibly as a result of his highly-public dalliance with Green, 26, whose father Sir Phillip is worth an estimated $5.1bn.

Meeks and wife Melissa, who spent July 4 apart, were seen arguing on the doorstep with the 38-year-old apparently reluctant to allow him inside.

A clearly distressed Melissa had previously been seen puffing on a cigarette and talking with sister Michelle Curl, 43, on the front porch.

She later posted a pair of selfies showing herself and her sibling, while Meeks added a photo, apparently taken at an earlier date, of him posing alongside his step-son Robert and son Jeremy Jr.

On Monday, Meeks' furious sister-in-law Michelle told DailyMail.com that the family is aware of his affair with Green but do not care 'at all' about his philandering.

Asked if she knew of the Topshop heiress and Meek's affair, Michelle, of Las Vegas, Nevada, answered: 'Yes and I don't care. I don't care at all.'

She added: 'We have no other comment to make. None at all.'

Michelle herself is yet to comment on the affair, but did insist she is 'still legally married' to the felon as she left work at a youth detention facility in Oakland, California, on Monday night.

Meeks' return home comes after he was pictured kissing and hugging Green aboard a $145,000-a-week yacht moored off the glamorous Turkish resort of Bodrum over the weekend.