Lagos: Grandma Sentenced To 25 Years In Jail For Drug Trafficking

Lagos: Grandma Sentenced To 25 Years In Jail For Drug Trafficking 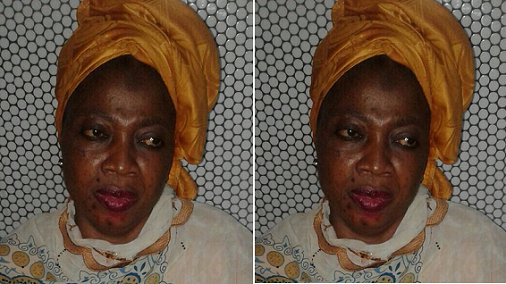 A Federal High Court sitting in Lagos, yesterday, sentenced 64-year-old Odeyemi Omolola, who is charged before the court alongside a Lagos socialite, Mrs. Funmilola Ogbuaya, also known as Funmilola Ogundipe, popularly known in social circles as Ariket, to 25 years imprisonment, for attempting to export 1.595 kilogrammes of cocaine to Saudi Arabia.

Trial judge, Justice Hadizat Rabiu-Shagari sentenced the convict, who is also known as Ariyo Monsurat Olabisi, after she changed her plea in an amended five counts of the charge.

The convict was arraigned on three counts charge of conspiracy, unlawful possession of banned drug, and attempt to export the said banned drug to Saudi Arabia.


The Lagos socialite, Ariket, is facing charges bordering on conspiracy, aiding and abetting and procuring of the said banned drug for the convict.

The offences according to the prosecutor, Mr. Abu Ibrahim, are contrary to sections 14(b), 11(b) and 19 of the National Drugs Laws Enforcement Agency Act Cap N30, Laws of the Federation of Nigeria, 2004.

The two accused persons had pleaded not guilty when they were both arraigned before the court, sometimes in May, this year.

However, at the resumed trial of the two accused persons yesterday, the convict, Omolara, through her lawyer, Mr. King Wilson, informed the court of her intention to change her plea, particularly, on count four of the charge, which bothered on attempt to export 1.595 kilograms of Cocaine to Saudi Arabia.

Her request was granted by Justice Rabiu-Shagari, who ordered the charge be read to her again. Upon the re-read of the charge, the convict pleaded guilty, and the prosecutor urged the court to pronounce her guilty as charged, and to permit him to review the facts of the case against her and to tender exhibits she was arrested with.

Attempt by the convict’s lawyer, Mr. Wilson to convince the court to suspend pronouncement on her sentence failed, as the prosecutor, Mr. Ibrahim urged the court to go ahead and pronounce the sentence, after citing several plethora authorities.

In sentencing the convict, Justice Rabiu-Shagari after listening to the submissions of both parties said, “I have listened carefully of the defendant’s counsel, it’s true that sentence is not for punitive but reformatory and to serve as deterrent to others. Consequently, the convict is hereby sentenced to 25 years imprisonment, starting from when she was first arrested.”

The judge also ordered that the ECOWAS passports and the Egypt Air ticket be forfeited to the Federal government of Nigeria.