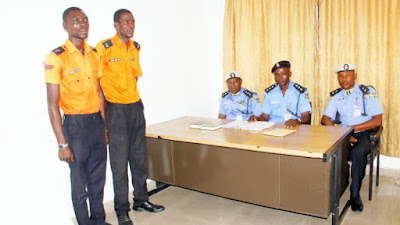 The Nigeria Police Force have dismissed two traffic wardens, three weeks after they were found to have extorted N15,000 from a motorist in Abuja.

Shuaibu Suleman and Musa Muktari were dismissed on Tuesday, according to a statement issued by the Inspector General of Police, IGP, Ibrahim Idris.

The IGP warned that the police would not condone corrupt practice among serving officials.


The dismissal of the two wardens came after a motorist (name withheld) filed a complaint to the Public Complaint Rapid Response Unit, PCRRU, Force Headquarters Abuja on May 30.

The complainant stated that while driving his vehicle on May 29, at about 12:30pm along Wuse Market road, he was accosted by the two Traffic Wardens who accused him of “beating traffic light” despite the fact that he did not.

“That the wardens started demanding for bribe before they will allow him go and they led him to an Automated Teller Machine (ATM) not far from the scene where he was forced to make a withdrawal of Fifteen Thousand Naira (N15,000) from his account which he gave to the traffic wardens”.

He also stated that that one of the wardens forgot his mobile phone in his car.