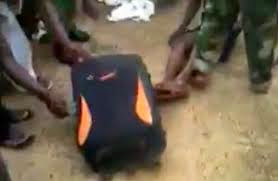 The Commandant-general of Mission for African Chaplaincy, a
Christian organisation in Lokoja, Kogi State, Sam Keddy
Balogun, has been arrested by the police for illegally
possessing a firearm.
The pastor was arrested along with his bodyguard with a
Toyota Hilux van painted in military colour, which registration
number was concealed. The police said it was being used to
hoodwink unsuspecting members of the public into believing
that the organisation is a paramilitary organisation recognised
by law.
Parading both men before journalist at the police
headquarters in Lokoja, the Kogi State police commissioner,
Seidu Madawaki said his men also arrested one Saliu
Mohammed who claims to be Pastor Balogunâ€™s bodyguard
with a short gun.
The commissioner said Saliu confessed that the pistol was
given to him by his boss who he said, was the commandant
general of the Mission for African Chaplaincy.
He said a search was conducted on the house and two
cartridges were recovered with one other already
expended...
It was gathered that at public functions in the state,
members of the organisation kit up like military personnel and
usurp the functions of security agencies and harass innocent
citizens with their military camouflage.
CP Madawaki said when police detectives led the suspect to
his bossâ€™ house; the boss admitted that he was the one who
gave the gun to Mohammed to be protecting him with. Other
items recovered in his house were detectivesâ€™ gadgets and
some paramilitary uniforms.
The commissioner said the painting of their vehicle in military
colour and the concealing of the number plate portray an
intent for criminality, adding that the activities of the
chaplaincy had constituted a threat to the state as thousands
of people including the jobless and civil servants had been
brainwashed to join the organisation as a paramilitary
organisation in the country.
In his confession, Pastor Balogun said he acquired the guns
illegally and begged with the police to forgive him. He claims
he and his organisation has been organising series of prayer
sessions for the police, the military and other security
agencies. But did they ask him to pray for them?