Bello Rolled Out Millions For My Recall, But Will Fail- Melaye

Bello Rolled Out Millions For My Recall, But Will Fail- Melaye 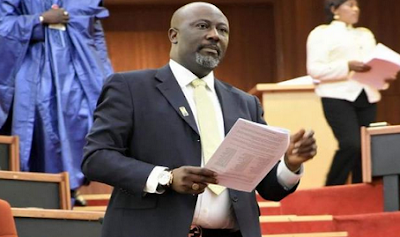 Dino Melaye, the senator representing Kogi West, has said that the ongoing move by some electorate in his constituency to recall him from the Senate will fail.

Mr. Melaye, who is representing the Kogi West Senatorial District in the Senate, made the statement
in Kabba, Kogi, on Sunday when he addressed his supporters.

He said his achievements in the Senate were enormous and as such the people of the constituency were solidly behind him.

Mr. Melaye, who later led his supporters on a peaceful march round Kabba town, alleged that the state governor, Yahaya Bello, was behind the move to recall him.


Some electorate in the seven local government areas that make up Kogi West Senatorial District on Saturday besieged polling units in the area to endorse the request for the recall of the senator.

They affixed the photocopy of their permanent voter cards to the recall form.

Mr. Melaye alleged that 30 supporters of his who refused to be part of the move were arrested on the order of the governor.

“Quote me, Kogi State Governor, Yahaya Bello, has released N200 million for each of the seven local government areas in my senatorial district to facilitate my recall from the Senate,” Mr. Melaye alleged.