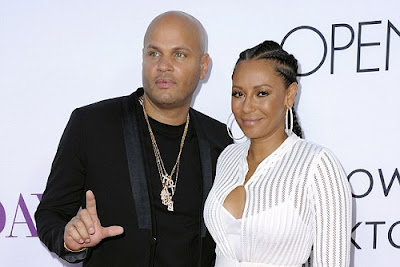 Hard up Stephen Belafonte's quest for spousal support from Mel B has been delayed again after a judge pushed back their hearing until the end of the month.
Stephen, 42, who currently has no income, is said to have racked up $60,000 in credit card debts and is in desperate need of support from the former Spice Girl, 42.
But Mel's lawyers argued that coming to a financial agreement was premature because of the money she spent getting a restraining order against him - which Stephen may have to cover part of, TMZ reports.
Unfortunately for Stephen, who is said to be homeless at the moment, the judge agreed and rearranged the hearing until the end of June.
TMZ previously reported that the film producer was kicked out of his family house following the break-up, while the messy divorce has cost him $500,000 in earnings.
On Friday, Stephen Belafonte took to Instagram to share posts which appeared to break his silence on the latest in his divorce from Mel B - as he claimed: 'The most dangerous liars think they're telling the truth', he said in the most which got wide reacts.