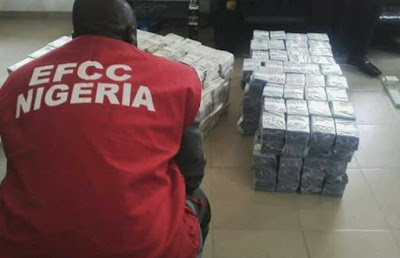 The funds had been stashed in iron cabinets and “Ghana-must-go” bags in the apartment before they were discovered and recovered on April 11, 2017 by the Economic and Financial Crimes Commission following intelligence information.

The anti-graft agency had earlier on April 13, 2017 obtained an interim court order temporarily forfeiting the funds to the Federal Government.


Justice Muslim Hassan, who granted the interim order, had given 14 days for anyone interested in the funds to appear before him to show cause why the money should not be permanently forfeited to the Federal Government.

But on May 5, 2017 when the matter came up, no one came before the judge to claim the money.

However, a private legal practitioner, Mr. Olukoya Ogungbeje, appeared before the judge, with an application, urging the judge to suspend the final forfeiture proceedings pending when a three-man panel constituted by President Muhammadu Buhari in relation to the funds would submit its report.