Photo: Pilgrim Arrested At MMIA On Her Way To Saudi With Cocaine 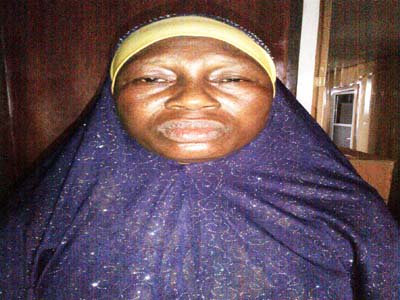 In this holy month of Ramadan when every true muslim is expected to shun every form of sin, a pilgrim from Kwara State has been arrested for trying to smuggle cocaine to Saudi Arabia.

The Alhaja-to-be, identified as Owolabi Oluwayemisi Modinat, was going on pilgrimage to Saudi Arabia with substances that tested positive for cocaine.

The suspect who hails from Kwara State was apprehended during the outward screening of passengers on a Qatar Airline flight to Saudi Arabia.

The suspect who hawks tea and bread to earn a living in Lagos explained that poverty led her into drug trafficking.

Read her statement to NDLEA officials after her arrest:

“I have never travelled outside the country before now. I am a single mother of four children. I sell tea and bread to earn a living.

“At present, I have no money to continue with my tea business due to family problems. A man met me and promised to help me by sponsoring my trip to Saudi Arabia. As a Muslim, I was happy but he later asked me to swallow the drugs. I agreed because he promised to pay me N300,000. I have too many problems and nobody to help me.”