A naked British tourist plunged from a hotel balcony following a boozy session with a 'ladyboy' hooker. The middle-aged man in his 40s was pictured covered in blood after he mysteriously fell from the balcony at around 5am this morning.

He had spent the night with transsexual prostitute Sittipong Maneekat, 35, who said they had a "good time" after taking food and alcohol back to the third floor room in Pattaya, Thailand.

But at 5am this morning the man fell after he went for a cigarette outside. Onlookers covered him with a small towel and gave him a pair of shorts as rescue workers bandaged his head. An ambulance rushed the man to Banglamung Hospital where he is now recovering.

Police chief Sukchai Junla said: "We cannot look at his passport because it was in the safe so we do not know his real name. We tried to open it but could not.

"The prostitute said she had been with him and he was foreign and British. She said they were not fighting and had a good time before.

"We looked at the room and there was no signs of a struggle.
"There were cigarettes and used condoms.

"The ladyboy said she had no idea how he fell. She was in the room when he went onto the balcony."

Pol Lt Junla said the tourist had suffered a head injury but he did not believe it was life-threatening.

He said the man would be interviewed when he was feeling better while police investigate how the fall happened. 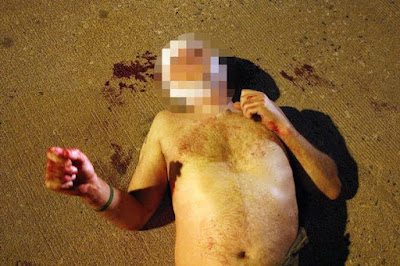 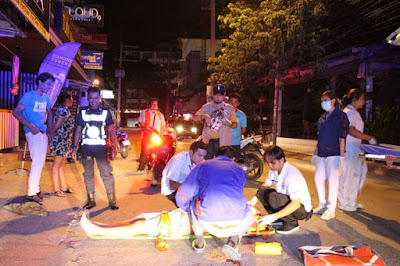 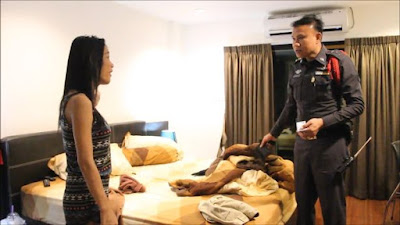 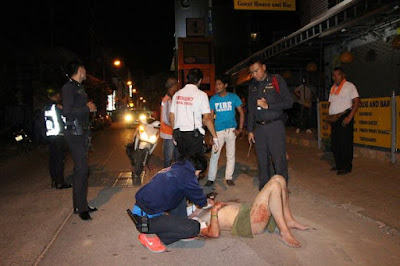