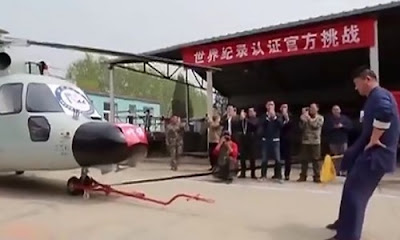 A kung fu master who dragged seven cars with his penis has become a new world record holder - by towing a helicopter even further with his manhood .

Several hundred people as well as official adjudicators watched as Ye Hongwei, who goes by the stage name "Ye Wei", towed the heavy military helicopter with a rope tied around his genitals.

Footage of the incredible feat shows him stuttering at first, unable to get the momentum needed to get the aircraft's wheels rolling on the tarmac outside the hangar.

But he eventually summons the inner strength necessary to drag the helicopter over 10 metres (32 feet 9 inches) - beating his intended target of 8 metres (26 feet 3 inches).


He was then given his world record certificate by officials representing the World Record Academy.

Ye is from the city of Zibo in East China's Shandong Province, where he has been practicing "zen tai chi" for over 30 years, but the feat was conducted in Fangshan District in Chinese capital Beijing.

Speaking after his successful attempt, Ye Wei said: "I don't know why I struggled in the beginning. I felt a bit nervous and unsure.

That attempt broke his previous record of pulling five cars. 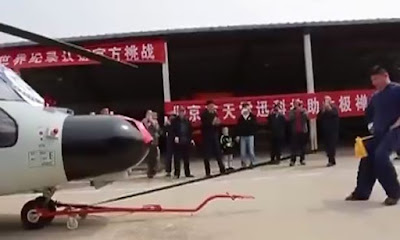 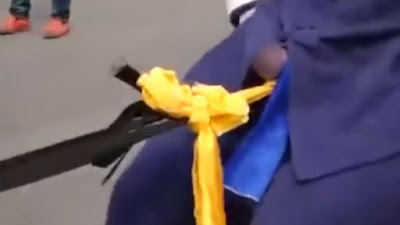