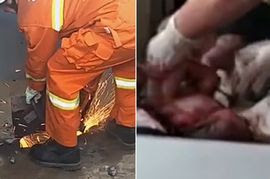 A newborn baby girl was rescued alive from the cesspit of a public toilet after being allegedly abandoned there by her mum.

The tiny child was found by shocked residents visiting the loos next to a waste treatment station in north-western China.

Her mum was nowhere to be found, so the locals called the police, who in turn alerted the fire service. The incident happened in Yulin City in Shaanxi Province. Hu Xiaogang, one of the rescuers on the scene, said the girl was found lying face-up in human excrement. But fortunately, there was not enough for her to drown.

The fireman said: "The baby appeared to be a newborn. Her umbilical cord was still attached."


"She was born in the women's toilet," Hu added. "But we decided not to breach the floor from that side in case the debris caused her secondary injuries."

The child's umbilical cord was cut and she was handed over to paramedics to be taken to hospital, where she is said to be in a stable condition after receiving treatment.

The authorities did not reveal why they thought the girl might have been abandoned.

But they are now searching for the child's mum, who could face charges for abandoning her child. 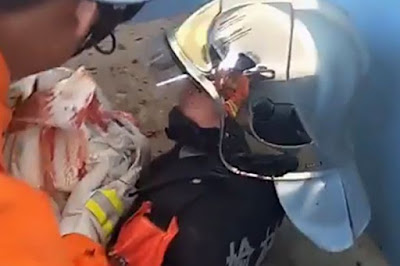