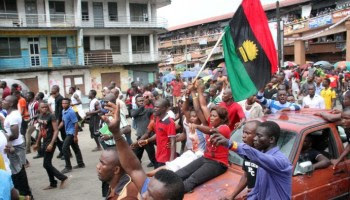 The Police in Ebonyi on Saturday confirmed the arrest of some members of the Indigenous People of Biafra in various part of the state for alleged unlawful sensitization programme.

The command’s spokesman, DSP Jude Madu, said on Saturday that the arrested suspects also included members of the Movement for the Actualisation of the Sovereign State of Biafra.

Madu said that the suspects were arrested for unlawfully sensitising the public to stay at home on May 30, in observance of the group anniversary. They would be charged to court and the command would ensure that they are duly prosecuted to serve as a deterrent to others.

“IPOB and MASSOB are illegal groups and did not get permission from the police to embark on such exercise which threatens the peace and security of the state.


“The command with the directive of the Commissioner of Police, Mr Titus Lamorde, has commenced intensive sensitization of the populace to disregard the sit-at-home directive and go about their lawful businesses,” he said.

Madu warned members of the group not to carry out outlawed activities within the state before, during and after May 30, as the full weight of the law would be brought on any defaulter.

“Any person or group found culpable would be arrested and duly prosecuted as the groups’ activities amount to mutiny or fighting a sitting and legally recognised government.

“IPOB and MASSOB are techniques developed by some individuals to gain public interest and recognition as the former is even a breakaway organ of the latter.

“These groups have not provided amenities or other forms of social security for the people they are directing to stay at home; it shows that their intentions are not sincere and must be rejected by all,” he said.

He advised the groups that not everybody was interested in issues concerning secession as people still remember the horrors of the civil war and other upheavals in the country after then.

According to him, they should realise that most people are not interested in their preaching, therefore, they should not force anybody to be involved in their illegal and unlawful practices.

Madu called on traditional rulers and town unions across the state to assist the police in sensitising the people and provide relevant information about the group’s activities.

“The command has distributed various call contacts (numbers) to the public to report activities of these groups within this period, especially molestation if they refuse to heed to the stay-at-home order.

“Any gathering of two or more people propagating the IPOB/MASSOB messages or executing related activities should be promptly reported to the police for immediate actions,” he said.

A Correspondent who visited the state police command reports that the arrested IPOB members were upbeat and chanting solidarity songs.