A little boy whose head is ravaged by deadly tumours is defying bullies who call him ‘monster’ and say he’s wearing a mask.
Amare Stover, eight, from Decatur in Alabama, USA, was born with a genetic disorder called neurofibromatosis (NF1) that affects one in 2,500 people and means tumours can develop anywhere in his body. 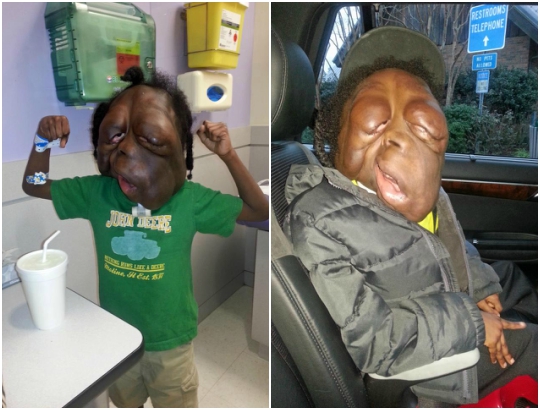 By the age of four, Amare had to be fitted with a permanent trach tube because the tumours grew into his throat and risked choking him to death.

The growths have continued to spread, leaving him blind in one eye and suffering from learning difficulties.

In addition to twisting and distorting the eight-year-old’s face, his swellings are nearly the size of watermelons.


Mum Kandice Stover, 30, says her son battles stigma every day because of his condition.

“The size of them affects him a lot – he gets made fun of, gets stares from people whenever he goes out in public and has been called a ‘monster’.
“Some of the children won’t play with him or say he is ‘ugly’, which makes it really hard., I don’t understand why people can’t just be respectful.
“Some adults have asked him where he got ‘his mask’ from – it’s really very hurtful and it only gets worse around Halloween.”
From one-month-old, neurologist started working to reduce pressure on Amare’s eye caused by tumours wrapping around his eye-socket.

“The tumours are in the whole of his facial region, his neck and also his brain – and his neurologist has told me they would only get bigger over time.”
She added: “Doctors gave him a trach tube because they thought one day he just wouldn’t wake up and would stop breathing in his sleep.
“Before he used to snore badly, which was caused by him struggling for breath because of the tumours.”
Despite multiple laser treatments, his left eye has swollen completely shut and now he can only see fractionally out of the other, with doctors telling his family to prepare for the worst. 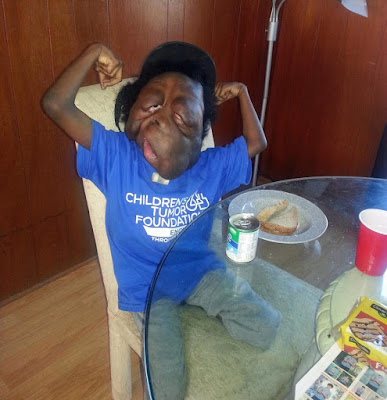 “Doctors have recommended that I start learning braille so that I can teach my son because the tumours growing around his eyes and in his ear canal.
“They tell me he will most likely lose his sight and hearing due to his condition.”
The family are set for a consultation with plastic surgeons later this month to see if they can remove some of the tumorous mass around his eyes in a last-ditch bid to save his sight.

"His father’s not around, so I have had to take care of him since he was four months old and have struggled to find a job, funds to pay for his treatment and more.
"At one point, I lost my home when he needed surgery to have the trach and g-tube fitted, I had to move in with a friend.
"There have been times where I've had to take him five times a month to the hospital and I don't have a car, so have had to beg people for rides and use the free bus when we can.
"It's hard to find employment because there are a lot of days where due to my son being on chemo medication he's too ill to go to school."
Source: The Sun UK