Three Ghanaian lawmakers and a former lawmaker of visa fraud, have been accused by British authorities of visa fraud, saying the men abused their diplomatic privileges to help people travel to Britain.

Jon Benjamin, the British high commissioner to Ghana, described the men’s behavior as “completely unacceptable” and said that in some cases, “these behaviors may arguably be criminal in nature.” His complaints were made in a letter to Ghana’s speaker of Parliament that was leaked to the news media on Wednesday.

The men were accused of falsifying visa documents and helping secure travel documents for family members who overstayed their visas. Each man faces a 10-year travel ban to Britain, according to the British authorities. 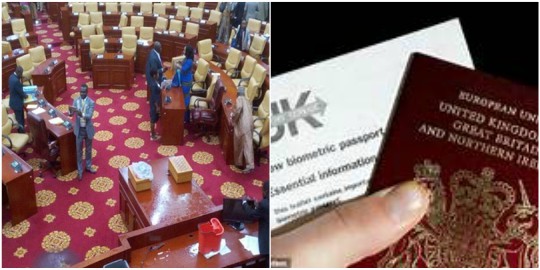 Some African political and business leaders have received attention for long
vacations in Europe. Some also send their children to elite schools there or travel for medical and cosmetic treatments.

One of the legislators cited in Mr. Benjamin’s complaint, Richard Acheampong, is accused of securing a visa for a woman he said was his wife, saying she was to accompany him for a two-week vacation in Britain. The High Commission said the woman was still in Britain. Mr. Acheampong has not offered information to help authorities track her, according to British officials.

The letter also asserts that another member of Parliament, Joseph Benhazin Dahah, initially applied for visas for a wife and niece, but when the application for his niece was denied, he applied to the Republic of Ireland from another country, changing the name of his wife and claiming the person he originally identified as his niece was his daughter.

A third member of Parliament, Johnson Kwaku Adu, traveled to Britain last July with his wife and 16-year-old daughter for what was supposed to be a two-week vacation. He returned to Ghana after just two days, but his wife and daughter are apparently still in Britain. The High Commission has accused him of facilitating the transport of a minor who cannot be traced.

The former member of Parliament, George Boakye, has been accused of securing a visa for his daughter, who overstayed her visa for more than three years but was forced to return after the British authorities intervened.

Visa fraud is common in West Africa, where citizens pay huge sums of money to people claiming to be visa contractors who can help them acquire visas to Europe and the United States. Some even sell their homes to pay middlemen, who disappear with the cash.

Ghanaian authorities in Accra, the capital, broke up a criminal ring last summer, arresting three men and seizing about 135 fake passports from 10 countries.

“Looking at the quantity of passports we got from them, a lot of people have suffered from their hands,” said Timothy Yoosa Bonga, an assistant police commissioner in Accra, in a recent interview.

Ghana’s minister of foreign affairs described the fraud accusations as “very serious allegations and unfortunate.” She said she would act on the findings once the speaker of the Parliament decided what to do.

The scandal has stirred outrage among some Ghanaians and dominated the headlines here.

“These M.P.s always bring shame to this country,” said Kwesi Dei, a resident in Accra. “They are paid very well, so it amazes me that some greedy ones are actually involved in visa fraud. The law should deal with them.”