Lagos State Govt. Set To Execute Rev. Kings Alongside Others


The General-Overseer of the Christian Praying Assembly, Chukwuemeka Ezeugo, a.k.a Rev. King, who was sentenced to death by hanging, by the appeal court, and whose death sentence was upheld the Supreme court had on 27 February 2016, will soon be executed by the Lagos State Government.

The decision taken on his case by the Lagos State Government, was disclosed to PM News by the State's Attorney General and Commissioner for Justice, Adeniji Kazeem. During the ministerial press conference held in Lagos today, Kazeem disclosed that the state government was reviewing the matter, with a view to taking a crucial decision very soon. 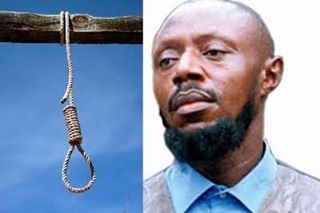 He further disclosed that he visited the Lagos state prisons recently, and discovered
that those on death row were acting as though they had certain rights, which excluded them from being executed. He revealed that the prison officials complained about this attitude of theirs, and called on the Government to act and remedy the situation.

“Very soon, you will see the action of this government on that issues, we are reviewing the case on Rev. King and others on death row. .

Lots of people are on death row, Rev. King is not the only one on death row, it is on the instruction of Ambode that I visited the prisons recently and I discuss the issue with the prison officials and they expressed their concerns.

We are moving in that direction of signing. The prison officials said we need to look at that seriously. Those on death row are beginning to think they have some rights. We are going to move in that direction, you will hear from me, but I will not tell you the exact date.”

Kazeem said the previous administration had not deemed it fit to sign documents, for the execution of convicts on death row. He however, vowed that the Ambode administration was moving towards, signing necessary document to ensure those on death row are executed.

He further revealed that the case of Major Hamzat Al-Mustapha, the Chief Security Officer of General Sani Abacha accused of killing the late Kudirat Abiola, has been re-opened the case. According to him, the government was putting machinery in motion to ensure that justice was done on the matter.