According to Politics Nigeria,the Matharoo sisters are wanted in Nigeria as the case they have with Femi Otedola is still in court.

Kiran and Taranjot Matharoo alongside their Nigerian accomplice, Babatunde Oyebode a.k.a Baudex are facing charges of extortion, blackmail and cyberbullying before a magistrate court in Yaba. 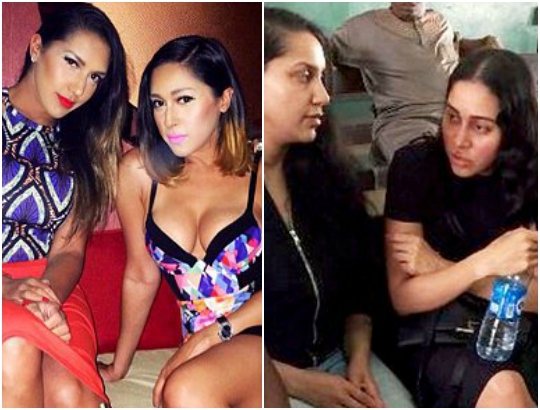 Continue reading the report by Politics Nigeria after the cut...


Trouble started for the sisters and Oyebode after billionaire businessman, Femi Otedola wrote a petition to the Nigerian police on an attempt by the trio to blackmail and extort him. After their first appearance in court, the sisters absconded leaving only Oyebode who has been diligent in making court appearances. Politics Nigeria went digging and a visit to the prosecutor’s office in Yaba revealed that the sisters obtained a temporary travel document that aided their escape.

Discoveries made during investigations

Politics Nigeria discovered that the petition against the trio was filed by three petitioners namely; Femi Otedola, Dapo Balogun and Omeregie Ivie (Lawyer). The sisters and Oyebode were tracked down to Eko hotel, Lagos and arrested by the Nigerian police force. They were arraigned before a magistrate court in Yaba and granted bail in the sum of N500,000 each and two sureties each. The police seized an apple laptop, a camera and 2 Canadian passports from the sisters.

Politics Nigeria was able to identify one of the sureties as one Alhaji Waheed Sobunlo.  Mr. Sobunlo was a surety to the trio. He wrote an undertaking to provide the trio on every date of adjournment. The undertaking was written on 26/12/2016.  At a second hearing into the case on in January 2017, the sisters did not appear in court and this prompted the presiding judge to issue a bench warrant for the sisters. The warrants were dated 25/1/2017.  A bench warrant was issued for their surety, Mr. Sobunlo on 2/2/2017 after he failed to produce the sisters in court. It was later discovered Sobunlo and 2 other sureties had also absconded. Only one of the sureties was arrested and he is currently in prison custody. Unconfirmed reports reveal that Sobunlo escaped to the US. All the issued bench warrants are still in effect.

During the course of investigations, Politics Nigeria learned that Sobunlo attempted to reclaim the passports of the girls from the police but met stiff resistance. A reliable source stated that Sobunlo revealed that the girls obtained a temporary travel document from the Canadian high commission in Lagos. Although Politics Nigeria can not confirm the authenticity of this statement, it is believed that this document aided the sisters in their daring escape.

The Canadian global affairs office has responded to the matter through a statement made available to Politics Nigeria by CityNews Toronto, and it reads;

Consular services have been provided to the Canadian citizens who had been detained in Lagos, Nigeria. To protect the privacy of the individuals concerned, further details on this case cannot be released.

IRCC is best placed to answer questions about the process for issuing emergency travel documents.

The statement was signed by the Global affairs spokesperson, John Babcock.

The Nigerian police has since written to the Canadian high commission in Lagos over the matter and currently awaiting a response.