CEO of Ebony life TV, Mo Abudu was dragged into the recent discovery of over $50million cash by EFCC at an apartment in Ikoyi.

Shortly after the news surfaced, Lere Olayinka, the aide to Governor Ayo Fayose took to his Facebook to allege that Flat B, where the monies were stashed, belongs to Minister of Transport Rotimi Amaechi. 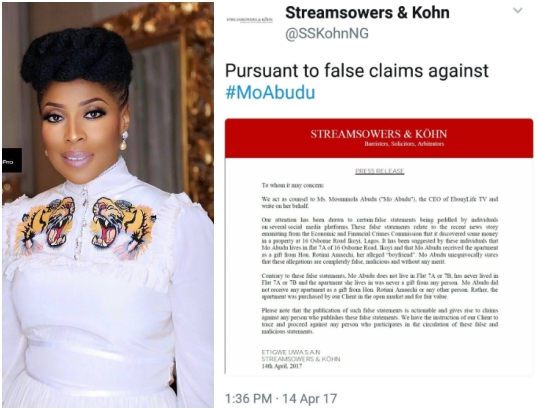 He went further to allege that the 2nd flat, 7A, in the same building was a gift to Mo Abudu who, he said, is rumoured to be in a relationship with the minister.

And now, in a statement shared on her Instagram page, the media guru, through her lawyers Streamsowers & Kohn, has shut down the claims that she owns the said flat, adding that she has neither been gifted an apartment in the building, nor has she ever owned any flat in it.


And then, the statement went further to warn anyone carrying the maligning story of possible lawsuit.
'Mo Abudu did not receive any apartment as a gift from Hon Rotimi Amaechi or any other person. Rather the apartment was purchased by our client in the open market and for fair value'.“Please note that the publication of such false statements is actionable and gives rise to claims against any person who publishes these statements,” the press release said.She continued, noting that her lawyers have instruction to “trace and proceed against any person who participates in the circulation of these false and malicious statements.” 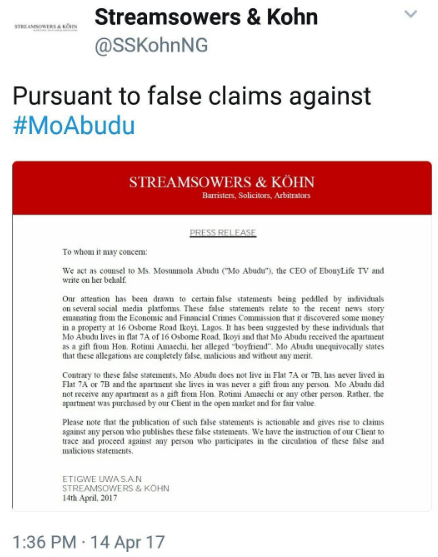