To avoid getting impeached, Mrs. Rita Maduagwu, who is the speaker of Anambra State House of Assembly, fled with the symbol of authority of the house. This caused confusion in the hallowed chamber,as no fewer than 28 members of the House had assembled to begin the impeachment process of the Speaker. Amidst the confusion, the governor, Chief Willie Obiano, drove to the House of Assembly complex, apparently to intervene.
The governor addressed the 28 members of the House who were members of the APGA, pleading with them to persuade others not to carry out the impeachment. The Speaker, noticing that her members were adamant in carrying out their mission, absconded with the mace, unnoticed. 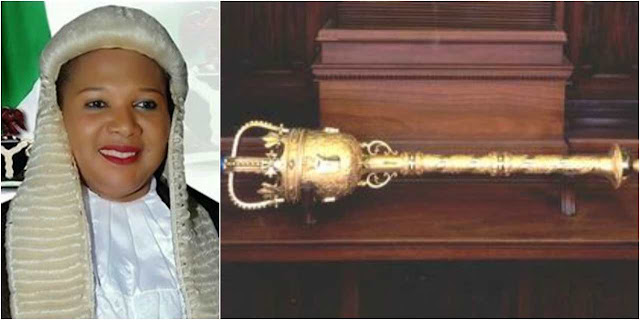 Punch reports that when the bell signifying her coming into the chambers rang several times, the Speaker was nowhere to be found. This caused the Majority Leader, Victor Okoye, to call for the adjournment of the sitting till Tuesday, April 11.
Speaking with journalists, the member representing Ekwusigo constituency, Mr. Onyebuchi Offor, expressed dissatisfaction with the Speaker’s attitude.
He said “We came this morning to hold our normal session, only to be disappointed that the Speaker had absconded with the mace.
We have had poor leadership under Rita Maduagwu. But I’m assuring you that justice must prevail. No matter where she runs to, we have determined to take a decision on the leadership of this House. There is no going back, because we are here to serve Anambra people well.”