A 5-year-old boy was burnt to death when a fire broke out in his home at Ijorgbor Street, Upper Sokponba road in Ikpoba-Okha local government, Edo state.

The boy was reportedly locked inside a room with his brother by their father when the fire broke out, engulfing their apartment. According to neighbours, after their father locked them inside, he went out to buy something, unfortunately, that was when the fire started. 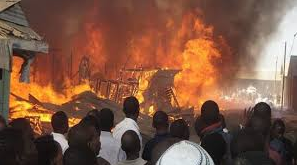 Neighbours said they heard the deceased and his brother scream for help as they were getting burnt and they rallied around to get the boys out of the burning house.


One of them finally succeeded in breaking through a burglary proof in one of the windows and rescued one of the boys. The other was not so lucky.

Osamudiamen Edobor, one of the neighbours of the deceased, spoke about the fire incident, revealing that the intensity of the fire kept them from getting to the second brother.

"They have stove and generator in that room. The man was cooking in the room. It is sad that one of the children died," Edobor said.

When contacted, the state police command spokesman, DSP Moses Nkombe, said he was yet to be briefed on the incident.