How I Was Stopped From Entering The U.S Even With A Valid Visa -Nigerian Shares His Experience


One of the affected Nigerians, who was banned from entering the United States of America, following President Trump's immigration ban, has narrated his experience at a United States airport.

According to Francis Adekola, the ban prevented him from attending his friend's wedding in 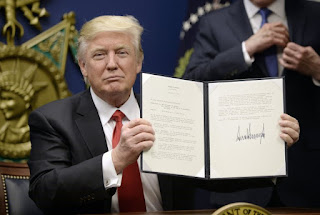 Mississippi on February 15, 2017, despite having a valid visa. Francis who was deported
shortly after landing the airport said;

“I travelled to the US on February 15, but when we got to the Atlanta airport, where I was to connect another flight, I was asked to step aside at the check-in counter by an armed border protection officer.

“He walked me to the luggage section and searched my wallet and bag. He also collected my telephone (set) and went through the contents: SMSes, pictures, WhatsApp chats, everything.”

The Canadian university Ph.D graduate, said he was informed by the immigration agent that he did not have strong ties in Nigeria and that he might not go back home if allowed into the US. He was allowed to speak to someone in America, but that didn't get him cleared from the airport, as he was placed on aircraft and returned to Abuja via Johannesburg.

“My documents were not released to me until the plane was airborne on its way to Abuja even though my home was in Lagos,” he said.

Francis who alleged that trip cost him N1M, disclosed he was not the only national affected.

The Punch reports that the US embassy could not be reached for comment, as it had yet to respond to an email, sent to it, seeking its reaction to the barring of Nigerians.

The Ministry of Foreign Affairs was also unavailable for comment.