Chimamanda Adichie Elected Into American Academy Of Arts And Letters

Chimamanda Adichie Elected Into American Academy Of Arts And Letters


Purple hibiscus author, Chimamanda Adichie, will be formally inducted into the American Academy of Arts and Letters in May as a foreign honorary member, after she got elected into academy. The award winning Nigerian author, will be the second Nigerian to be inducted into the academy. Wole Soyinka was the first and he got inducted in 1986. 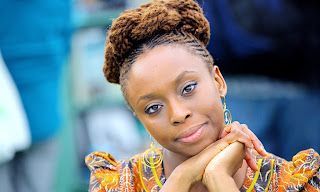 Chimamanda will be inducted alongside 12 others into the academy, which is an
honour society whose goal is to "foster, assist, and sustain excellence" in American literature, music, and art. The academy which holds its election once every year, currently has 250 members, a number that will be increasing with the induction of the Nigerian author and others.

An excerpt from the academy's press release reads;
“When the American Academy of Arts and Letters holds its annual induction and award ceremony in mid-May, Calvin Trillin, secretary, will induct fourteen members into the 250-person organisation and Yehudi Wyner, president will induct three foreign honorary members."