Apostle Suleiman Sued By A Girl He Will Lick All Over Before Sex, Impregnated And Dumped


The founder of Omega Power Ministries, Apostle Suleiman has been dragged to court in a N500million lawsuit, by a girl he allegedly impregnated and dumped. It is alleged that he promised to marry the lady, Miss Stephanie Otobo, as soon as he divorced his wife.

In a letter Miss Otobo’s attorneys, Festus Keyamo Chambers, wrote to the Inspector-General of Police, she alleged that her romantic relationship with the Auchi-based pastor started in Canada in 2015. She also disclosed that she left all she got through hardwork in Canada, and traveled down to Nigeria to become the Pastor's mistress and she also alleged he promised to buy her a house immediately she arrives Nigeria. She went on to reveal that when she arrived Nigeria, Apostle Suleiman took drinks and gifts to her family in Delta State, signifying his his intents to marry her, an event that had her mother, sister, cousins and other family members in attendance. 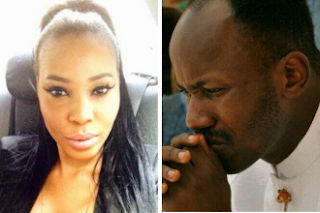 In another letter dated March 03, 2017 and addressed to the Pastor, it was alleged that Apostle Suleiman who wanted more male children, will invite Stephanie to all church programmes in Europe and Canada, where he slept with

The lady who dragged the Pastor to court, claiming N500M in damages for breach of trust to marry her, further alleged in her March 3 letter that when she got pregnant and informed the Pastor, he got angry and wanted her to abort the baby as he alleged it will tarnish his image. She then alleged
that she was given a concortion to drink, which made her bleed profusely, after which he called off their engagement. Stephanie who alleged she went back to Canada after the incident, said she returned to Nigeria after she was begged by the Pastor who wanted to silence her by all means. According to Stephanie, she was arrested at a United Bank of Africa branch by heavily armed policemen from Federal Criminal Investigations Department (FCID), Alagbon, at the Anthony Village area of Lagos when she went to withdraw money paid into a frozen account by the Pastor, and has been in detention, where she has been denied food and visitation by her lawyers. The lady also disclosed that before her arrest, she met a Pastor in Warri who she told her story. The Pastor who recorded it all, was alleged to have been using this to extort money from Apostle Suleiman.