A barber, Gbenga Akinade, on Friday at an Ibadan Grade C Customary Court, secured the dissolution of his six-year-old marriage on grounds of infidelity. 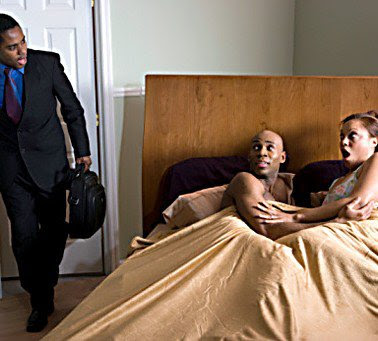 Gbenga had told the court that his wife, Busayo, had sex with her former husband on his (Gbenga’s) matrimonial bed, adding that he could no longer tolerate her adulterous way.

He testified that he met the defendant when she was hawking herbal liquor (Agbo-Jedi), and that both of them agreed to marry after few months of courtship.

“I did not know that she was a divorcee with two kids until she got pregnant for me. I began to suspect her adulterous ways after she gave birth to our second child. She used to go out for two or three days, leaving the children with neighbours. Her immoral affairs with her ex-husband came into open recently when I caught her having sex with the man on our matrimonial bed. I beat the hell out of her that day but allowed the man to go because unpleasant things might happen if I beat him. I decided for divorce in order to forget how I met her with her ex-husband on my bed.”
The petitioner prayed the court to allow him to have the custody of his children.

“I promise to take good care of them,’’ he said.
The respondent, in her defence, said that her estranged husband was aware that she had two children before he married her.

She, however, was silent on the allegation that she had sex with her ex-husband on Gbenga’s matrimonial bed.

She pleaded with the court to peacefully resolve the conflict.

“I am not ready to leave my matrimonial home and my children,’’ she said.
The President of the court, Chief Mukaila Balogun, dissolved the marriage on grounds of lack of love.

“The opinion of the court is that there is no more love between the parties based on the testimonies of the couple,’’ he said.
Balogun ordered that two of the three children should be in the custody of their father while the last child should be with the mother.

The president of the court ordered the petitioner to be paying N4, 000 monthly to the respondent for the upkeep of the only child with her.