The red haired Dancehall Queen speaks in an exclusive interview with Vibe.ng about her childhood and an alter personality that will stun you. 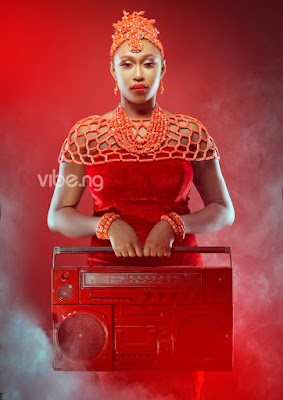 In "A Cynthiarella Story", she shares deep details about her ever so controversial brand evolution and her perception on the complicated emotion of love. Read the interview below...

Once upon a time in not-so-faraway Benin Kingdom; there lived 11-year-old Cynthia Morgan who was by every standard, not your regular pre-teenager. Not only was she a backup singer for her mum (who was a band musician), she was also decently skilled at playing the talking drum.

By age 13, Cynthia’s life dreams did not follow the cliche lawyer-doctor-engineer pattern. She knew exactly what she wanted to be. A musician and a strong player in the entertainment space.

After her first professional attempt at 16, she released an impressive debut single featuring General Pype when she was 17 but… It was not until her feature in Jhybo’s Ejo Le fe ro that many became witnesses to what seemed to be too much talent for a young and naive 19- year-old.

Even though her appearance on Jhybo’s single received heavy applause from all and sundry, Cynthia was convinced that her less than 16-bar rendition was nothing compared to her actual capabilities. 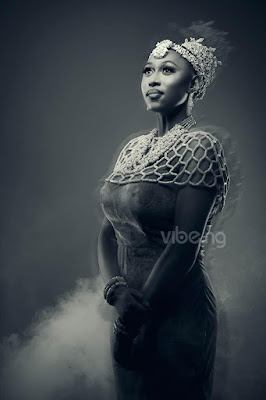 “A lot of people liked it but I think that was just like um, 1 percent of what I could do at that point…”
Replying to my accusation of how she was first a rapper before taking up dancehall, she emphasized that her musical ability was too vast to be sectionalized into genres.

“I was never really a rapper per se. I just knew that I could do like different stuff so once in a while, I rap, I sing, I do my dance hall, I do everything.

I think music is a feeling… It’s the way you feel. It’s your emotions. It’s whatever I think of at that point…”

By the representation of her brand on TV and other media, the Cynthia I received was definitely not the one I had readied myself to meet. This one looked too calm and too normal in her vintage shirt, dull red dreads, a pair of geek chic glasses and a constant smile.

Despite the fact that she spoke in pure English, some of her words effortlessly came out in Jamaican Patois; like the manner in which she had just said dancehall.

Patois came naturally for Cynthia Morgan but it took the random comic greetings of one of her patois speaking uncles to help her tap into it.

“I was interested in it when I was about 7 cos (sic) I had like, uncles who spoke Patois around me…It was a gift. I just needed to hear that connection like, I needed to hear someone say it…

The first word I learnt in Patois was Wagwan.

At that point, one of my uncles would normally say (she mimics uncle’s voice) “Wagwan?” and I’ll be like yo, what’s wagwan? (Laughs) 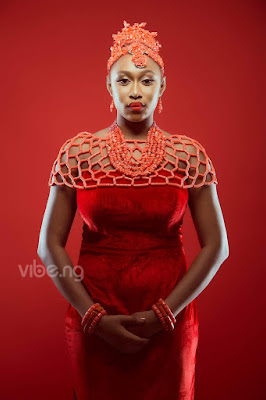 And then he told me and every other thing became history.”

Contrary to some beliefs, The patois lingo has never affected dancehall appreciation in Nigeria. Citing her love for Koffi Olumide’s music without understanding what he was saying, she believes that music is a spiritual feeling that supersedes mere language.

Cynthia Morgan’s brand underwent what I’d like to call a two-fold transformation. First, she was re-introduced to us as a more mature lady in her killer cover of The Game’s One Blood; as opposed to the girl we beheld in Ejo le fe ro video.

By her second brand emergence in 2013/14 which saw the release of her ingenious singles Don’t Break My Heart and Lead Me On, Cynthia had now fully developed; looking up to par with the industry’s standards of beauty set by a Nicki Minaj Era. 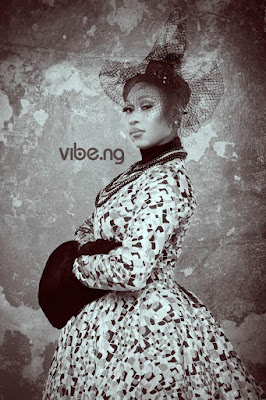 She admitted that just like every other artiste, she did have issues with her brand evolution.

Further sealing her brand in the mind of her fans and the public, was the introduction of her highly controversial red hair which by the way, was an accident that birthed a lasting trend.

“People do not know that part of me. I am a very quiet person. I would never wear red hair. 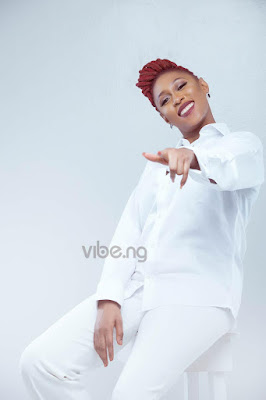 I was shooting a video and I said “can you just get 1 red hair…” just to use it as a costume and then the next thing my manager wanted me to be wearing red hair forever… (Laughs) I was like “really?”
So it got to a point, I went for a wedding and when my stylist packed my bag, they purposely packed only the red hair so I didn’t have any other option than to wear my red hair…

I took a picture with it and it got on Forums that I had started wearing red hair so I had to stick it. And then it got to a point, I liked it…

(Jocularly) If you even tell me to take it off, I’m gonna say no…Red hair is mine. (Laughs)
Irrespective of the criticism this look may have brought her, Cynthia really does not care. As far as she is concerned, beside her goodwill and her heart, every other thing is entertainment.

“This is my job. I normally tell people, If you’re a judge or a lawyer, you wouldn’t go to sleep with your robe on…I know me and that’s what matters.”
Occasionally airing her rational opinion on a few things, she sat wherever she was told to, posed how she was asked to and never disagreed with anybody’s opinion of what lipstick would suit which outfit best.

Even though the entirety of Cynthia Morgan’s sound portrays her as a fiery, feisty, rebellious and overly extroverted young woman, the lady who was either smiling, or keeping to herself throughout the whole shoot , was the exact opposite. She revealed that she did have multiple personalities of which she had named 3.  Stargyal, Cynthia Morgan and Madrina. Without  fully delineating the distinct traits of the personalities, she believes her true fans can tell the characters apart, through her music. 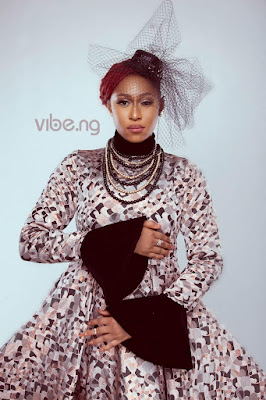 Cynthia’s confidence, her worldview and her ability to be a different person in different situations, explains why her mum gave her a special nick name.

“My mum says I’m a young old soul.”
A young old soul she really seemed to be. At least her interests outside of music suggested that. On the 26th of May 2016 (which is also her mum’s birthday) Cynthia launched what she calls the Mama Cynthia Empowerment Foundation.

Apart from just being something she was naturally disposed to doing, one of the main purposes of the initiative is to fulfil the scripture according to her Christian faith as it concerned giving to others. At this point, it was obvious that religion meant more to Cynthia Morgan than just the Jesus Christ wallpaper on her phone.

Another of Cynthia’s project, is her soon to be launched AhMama merchandise. The name was coined from “Mama”, which she was popularly called growing up although one of her aunts always added an extra “ah”.

It’s an African story about a supernaturally gifted woman…a child who became a woman… A heroine… and she’s here to save the world.”
ahmama-2 ahmama-cynthia-morgan

After exclusively sharing that she had patched things up with her estranged father and they were now in good terms, I literally threatened her to tell me exactly what German juice meant.

“It means like…basically a juice that is really strong.

A juice that is authoritative. (laughs at her own self)

You’ve got the German juice…” (Continues laughing)
Even though she was satisfied from further confusing me, she confessed that it gladdened her to know that people had various personal definitions.

Next in line in Cynthia’s music career so far, is the release of her viciously anticipated debut album. She may not be sure of the guest appearances now especially as she is not so big on featuring, she says there will definitely be pleasant surprises.

So far, the international dancehall community has welcomed Cynthia Morgan’s tweaked style to the genre: One which has evolved from the Stargyal sound to what she now labels “The Madrina Sound”.

She spoke so highly of her longtime producer and friend Tony Ross; saying he was now more like a brother to her especially because he understands her so well and appreciates her beyond her artiste status.

As we traced the recurring theme of love in most of Cynthia’s songs, she exclaimed that she recently found out that she was a lover. She later confirmed that there was no man in her life and that it was sometimes important to be single to allow for clear focus, thereby avoiding the stress and distractions that came with dating.

After our brief argument as to whether dating was permitted in the bible, she tells me the greatest attribute a lover can possess is wisdom as it sums up all the other cliche ones.

There are 2 things Cynthia clearly dislikes.

Deceptive people.
Having her spiritual energy zapped before a performance.
For a realistic optimist, Cynthia sure has some weird beliefs. To the best of her knowledge, success is a product of divinity and has nothing to do with habits or human influence at all. On the issue of male domination and difficulty faced by women in the industry, she displays some more weirdness.

The more battles you fight, the more territories you will conquer.”

In what might be the biggest paradox yet (being that the theme of her feature is “A Cynthiarella Story“), our darling red haired princess does not believe in fairy tales 🙄. Infact, when I asked her to arrange movie genres in the order that she would watch them, romantic comedies came last; with horror making it to first place.

However, all these do not change one fact. As far as Ragga/Dancehall is concerned, in Nigeria and even beyond, Cynthia Morgan is not just the only female who the shoe perfectly fits. She also doubles as her very own fairy Madrina (Spanish for godmother); cautiously wielding the wand to what could turn out to be a truly magical and memorable career. 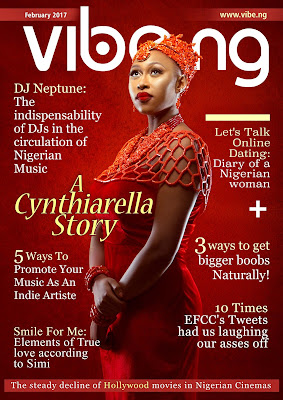