In what many have termed the most heroic act yet by a Nigeria clergyman, Dr. Chris Okafor, the General overseer of Mountain of Liberation and Miracle Ministries, a.k.a Liberation City has truly caused a profound upset to both the political and religious establishment in Nigeria by his fiery admonitions during Sunday service at his church. 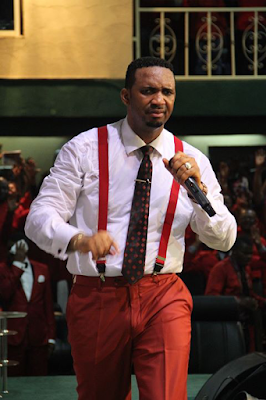 The Oracle of God, as he’s fondly called literally went nuclear when he angrily chastised the church leadership in Nigeria and wondered why they are so quiet in the face of mounting confusion, recession, destruction, oppression and killing of Christians in most parts of the country.

In a video that is now going viral on the Internet, Dr. Chris Okafor called out some big men of God when he angrily yelled, “SHAME UNTO PASTOR TUNDE BAKARE!” Then he preceded, “FATHER MBAKA, WHAT HAS HAPPENED TO YOU?”

According to the man of God, Pastor Tunde Bakare was one of those who led the Save Nigeria (SNG) group to occupy Lagos while protesting so called bad governance under former president Jonathan, and was also a very vocal critic of that government. He wondered why Pastor Bakare has gone so silent even when it’s obvious that Nigeria now has a government that is far worse than the one he protested against. Speaking further on pastor Tunde Bakare, the man of God thundered, “That Pastor is a two-faced Pastor!”

On Father Ejike Mbaka, the man of God accused him of disqualifying former President Goodluck Jonathan’s administration probably because, as alleged, he requested certain favors from that Government but was turned down. The man of God wondered why Father Mbaka who openly told the world that President Buhari was the messiah has now gone so silent, and is shamefully unable to even criticize his regime in the face of gross misconduct and bad governance.

Blowing hot, he said “Mbaka, go and examine your prophetic ministry”. He said that for Father Mbaka to now complain that people are dying of hunger and still find it difficult to criticize the government of the day simply makes him a hypocrite. He then went on to ask, “What has happened to you, Father Mbaka?”

The man of God did not spare the General Overseers of The Redeemed Christian Church of God when he made a veiled reference to the Redeemed Christian Church of God pastor who was killed during a morning cry session on the outskirts of Abuja and how the church played it down. At this he also wondered why the Vice President, Prof. Yemi Osinbajo who is a pastor, has done so little to help. He also wondered why the General Overseer of Deeper Life Church has been quiet even when members of his church have taken a lot of hit from the massacre of Christians that has been ongoing.

Finally, the man of God also referenced the killing of one Imo State born Christian woman who was a few months ago beheaded in the Northern part of Nigeria. He then said “we also need to know if Rochas Okorocha is a Christian or a Muslim, because those people killed are from Imo State and he did nothing”.

The man of God said that if Christian leaders were speaking out and doing what they were supposed to be doing, we wouldn’t have a country where the rule of law means nothing and the government doesn’t even respect court orders. According to him “ why should Nnadi Kanu still be in detention when the court has given orders for his release? Why can’t they obey the court orders first, and then follow due process? Also, we know Dasuki may have done some things but if the court said you should release him, then release him, and let him have his time in court!”

He then went on to say that “as a matter of fact, the Government should release Kanu with immediate effect! We must obey the court and stop taking laws into our own hands!”