The police have launched a manhunt for a boat conductor, Kole Adebayo, over the death of Abiona Ajisefinni at Igbogun village in Lekki Local Council Development Area of Lagos State on February 15.

Last Friday, the police arrested the community’s Baale, Adekunle Onileiyan, but granted him bail to enable him produce the suspect. 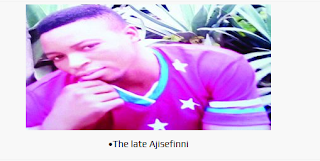 It was gathered that Adebayo’s father, a boat operator, was billed to attend a meeting at the State Criminal Investigation and Intelligence Department (SCIID) Panti, Yaba, but did not show up.

His absence was said to have prompted the arrest of the Baale who came to represent him.

According to sources, Adebayo stabbed the deceased with a sharp object while working as a conductor aboard his father’s boat.

It was gathered that the suspect had a disagreement with the late Ajisefinni’s sister, Abosede, who was a passenger on the boat.

The Nation learnt that Adebayo plucked some bananas from the bunch Abosede bought in the market, leading to quarrel between them. It was learnt that the argument led to a fight when they got to shore.

The late Ajisefinni, who came to the waterfront to assist his sister with her load, sighted them fighting and rushed to her defence.

Having settled the quarrel and scolded Adebayo for fighting with a woman, the late Ajisefinni carried his sister’s load and headed home.

But unknown to him, the still enraged Adebayo allegedly pursued him stabbed him from behind.

Adebayo was said to have fled the community with a friend, Asumo Giwa after the attack.

A relative of the deceased who gave his name as Ahmed, said: “There was disagreement over payment for the banana because the boat conductor was just eating the banana the woman had bought for sale. In the course of the argument, Abosede told the conductor that she has his age mates as younger brothers at home and that one of them was around to assist her.

“Immediately, the boat conductor heard younger brother, he approached Abiona Samuel Ajisefinni (deceased), who was assisting his sister to carry some goods and stabbed him in the neck with a spear. The boat conductor is a village tout but he worked with his father that day.

“The deceased was rushed to Akodo General Hospital but died while in transit. The murder case was reported at Akodo Police Station but later transferred to SCIID Panti, Lagos Mainland. We are just pleading with the police to ensure justice is done. Our son should not die in vain.”