Earlier on today, Laila's Blog reported about 30-year-old physically challenged Bosede Adelani who raised an alarm over viral pictures of her with Adepeju Olukokun, “the man who had made her rich.” 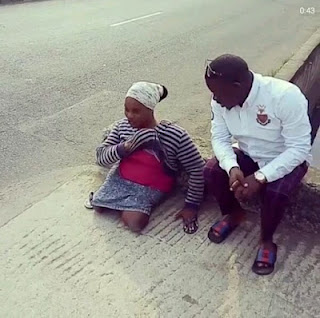 Bosede had accused Olukokun of using her as a publicity stunt for his charity work and taking pictures, videos of her without her knowledge. Read that here if you missed it.
Olukokun has responded. Below is what he wrote on his Instagram page: It is very true that I met the lady on my way out on one of my meeting, and I asked her what she wanted, she responded that she needed a wheel chair and some capital to start a little business. This I promised to help her with. Now to the main issue, I told her by viture of providing her all this she would stop begging and face her business something I asked her to sign an undertaken for. What amazes me most was she declined. Let me quickly draw you attention to a scenario that happens at the ikeja city mall sometime back when I helped an old woman and also told her to desist from coming around and saying I would have her arrested if caught around there again. Unfortunately I still met same person loitering around the ICM the next day. This is another case of greediness and selfishness. Though she is yet to get what she wanted in this instance but we were about providing all this for her but she declined signing an undertaken not to return to begging. At that instant this incident was logged in with the Federal SARS as I predicted something of this magnitude before now.  Do we render help to the needy - YES  Our motto is to make sure food is right for everyone and suffering is eradicated from the streets but obviously we would keep trying. There would be some stumbling blocks like this but we shall overcome. Many thanks to you all -