Panic has gripped parents of a 22-month old girl, Mayowa Aweda, of Unity Estate, Idimu, Lagos, after their housemaid allegedly fled home with their child on Monday. 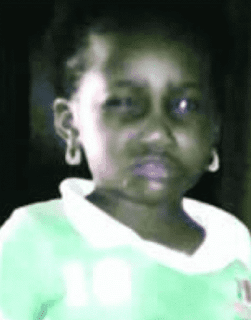 The housemaid, who is known only as Christiana, was said to have left with the girl around 7pm when the parents were not at home.

PUNCH Metro reports that Mayowa’s mother, Iyabo Aweda, had, while she and her husband were going to work that morning, instructed Christiana to wash plates and clothes before she returned from office.

It was gathered that when the husband, Leo Aweda, came back from work in the evening, Christiana
had yet to carry out the tasks.

A few minutes after, Leo was said to have gone to a salon to have a haircut and took Segun, their first child, along, leaving Christiana and Mayowa at home.
“I came back from the salon around 7am to discover that Mayowa and the housemaid were not at home.“A resident said he saw her going out with my daughter around 7pm. She left with a rechargeable lamp. That was the only thing she took away; all her belongings are still at home.“We got her in July 2016 through my wife’s friend, called Iya Samuel. We enrolled her in a private school and my wife sends N5,000 to her mother every month. She is in Basic 5. She is from Iseyin, Oyo State. I didn’t want my wife to employ her in the first place. We don’t have her picture,” Aweda told Punch on Tuesday.The mother said Christiana had once fled home after she damaged the rope used for starting a generator, but was intercepted by a security guard at the estate gate.

She stated that she had wanted Christiana to leave a few months ago, but the housemaid’s mother begged her to rescind her decision.
She said,
“When I was going to work on Monday, I was supposed to take Segun somewhere, but my husband said Segun would not go with me. He asked me to let him stay with Christiana. She was happy when I told her she would look after Segun that day.“I told her to clean the kitchen, wash plates and her clothes, as well as the children’s clothes. I told her to pick up Mayowa at creche by 5pm. I do have a lot of meetings on Mondays, which made me to get home late.“When I got home, I discovered that she had yet to do any of the tasks and had probably been watching television all day.“I think she felt I would beat her for not doing the work. The fear probably made her to flee home with my daughter. But I have never beaten her before for any reason and we take good care of her. I only threatened to beat her so she could do what she was supposed to do.”Punch adds that that the guarantor, Iya Samuel, was arrested by policemen from the Idimu division, where the case was reported, while Christiana’s mother had been informed about the incident.
“We called the woman this morning (Tuesday) to ask if she saw Christiana. She said she had not seen her,” Iyabo added.Hours later, an enthusiastic Leo called and told PUNCH Metro on the telephone that the maid and his daughter had been found at Oshodi under bridge by the police.
“Praise the Lord, I just received a call that they have been found in Oshodi under bridge. I learnt that some policemen saw them under Oshodi bridge. She had yet to tell us why she fled home with the child,” he said.