Man Stabbed To Death After Fight Over Lagos Prostitute

Man Stabbed To Death After Fight Over Lagos Prostitute


A man identified only as Asunmo, has been detained at the State Criminal Investigation and Intelligence Department, Yaba, Lagos State, for allegedly killing a cab driver named Sodiq Fatai. 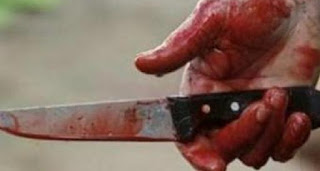 Asunmo stabbed Fatai to death with a knife at the White Sand area of Ijora Badia, during a scuffle over a prostitute.

He had challenged Fatai over his relationship with the lady, whom he (Asunmo) was dating.


A community leader, who did not want to be identified, told Punch that his attention was called to Fatai’s corpse, which was abandoned on a heap of refuse in the area. He said:
I was told that the two men fought and one stabbed the other to death. The police from the Ijora Badia came to take the corpse away.”Another resident, who did not identify herself, said the two men were drunk. She said:
“The men were always fighting after drinking. They fought after they were inebriated.”Another resident said the victim was a driver, while the suspect had no job.

A police source said Asunmo and Fatai had a disagreement over a woman. Punch reports he said,
“Asunmo suspected that Fatai was dating his girlfriend and he confronted him. Although the man denied, he attacked and killed him. The woman in question is a prostitute.”The Police Public Relations Officer, SP Dolapo Badmos, said the suspect had been arrested.

She said,
“The corpse has been deposited in the morgue of the Mainland General Hospital. The suspect, who initially escaped, has been arrested.”