A monarch in Ogun State has promised to help the two abandoned babies in the Somolu area of Lagos State and their family if the parents would bury their differences. 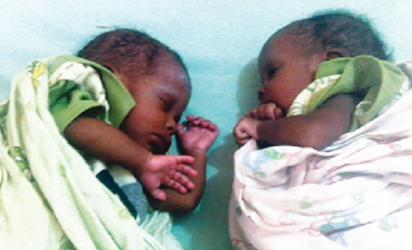 The monarch, who asked not to be identified, urged the Ademolas to come together to take care of the twins, saying it was in their interest.

This is just as the twins’ father, Adeyemi, said he was not opposed to a reconciliation, but wanted his second wife, Sarah, to “suffer” for abandoning the babies when they were barely two weeks old.

Sarah was rushed to Felken Maternity Centre on Awofodu Street, Somolu, where she was delivered
of a set of two girls on December 3, 2016 who she later abandoned because husband Adeyemi couldn't foot hospital bill.

Adeyemi, in turn disowned his wife and said he was not interested in her whereabouts after kindhearted Nigerians helped pay off the bill.

Punch reported that after Sarah abandoned the kids, Adeyemi’s first wife, Abimbola, went to Felken to nurse the babies.

Now a monarch has said he would help the babies if their parents could come together.

Punch reports he said:
“I read the touching report of the abandoned twins like other Nigerians and I decided to settle the bill, but I was told it had been paid.“But I believe there are other ways of helping the family. What I, however, think is important is that the parents must let go of their differences. Those babies would have been missing their mother and no matter what the woman might have done, she needs to be around them to breastfeed them. There is nobody that can play that role for them, but their mother. I want to urge the man to forgive his wife.”When contacted, Adeyemi said his family had decided to let Sarah realise her error first.
“How wicked can a woman be to have left her babies and run away? It is not true that the hospital didn’t attend to her as she is claiming. There were other patients in that hospital and they had no reason not to treat her. If she was ill like she claimed, how come she suddenly recovered and is now asking for the babies?“I believe that there are some people pushing her. I have been getting calls from some of her friends, telling me to release the babies to their mother. They believe we have made a lot of money.“She does not really care about the babies. I don’t want her to know where the babies are. They need to be protected from her. My family has said we should not just allow her to return without feeling the pains that she had done something wrong.“Except Senator Ashafa, no other person has given the twins anything. And we need money. I just lost my job because I decided to take a break to take my babies at the police station.”Adeyemi confirmed that the monarch had reached out to his family, saying the matter was being considered.

Sarah told PUNCH Metro she had returned from Agbowa, her parents’ hometown, to the Somolu area.