A 21-year-old man, Ugochukwu Kingsley, will on January 26, know whether he will be tried for allegedly defiling an 11-year-old girl. 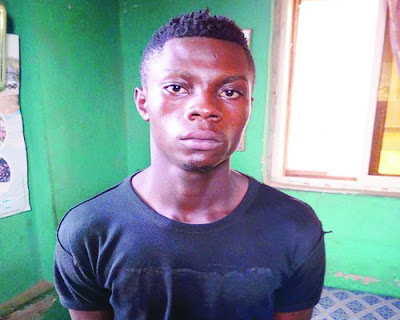 Kingsley, from Abia State, was arrested last November 28 by the police following a complaint by the girl’s parents that he had had unlawful sexual intercourse with her.

The Nation reports that the suspect and the victim are neighbours in Oriwu along Igbogbo Road, Ikorodu.

Ugochukwu Kingsley was accused of entering the bathroom while she was taking her bath. The girl
was said to have started bleeding after the act.

But, before his arraignment, Kingsley told The Nation that he had no sexual relations with the girl.
He said:
“I didn’t force myself on her. I asked her, she was aware of everything. I didn’t sleep with her but I made an attempt. I didn’t know she was bleeding.”The suspect was arraigned by the police on December 5 on Charge No: IKD/A/116/IKD/2016 before Chief Magistrate O. Oshoniyi on one-count of “unlawful sexual intercourse with a girl child aged 11 years.”

Chief Magistrate Oshoniyi barred the public from the proceedings because victim is a minor. The Nation learnt that Kingsley pleaded guilty to the charge.

Mrs Oshoniyi ordered that the case file be transferred to the Director of Public Prosecution (DPP) for advice. She remanded Kingsley in Kirikiri.

The case was adjourned till January 26.