Aliyu Abubakar may be the owner of Abuja’s most luxurious building and a friend to several Nigerian government officials, past and present, but the noose is reportedly tightening on him in Nigeria and in Europe. 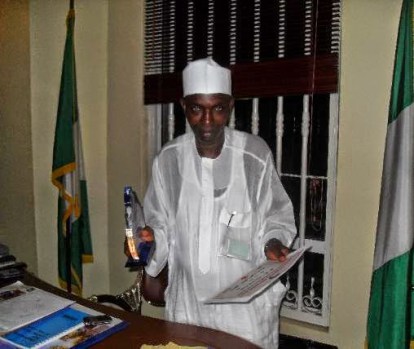 Aliyu AbubakarAbout a week after Nigeria’s anti-graft agency, EFCC, filed money laundering charges against him for his role in the Malabu $1.1 billion scandal, evidence has emerged that Italian authorities also want him for “international corruption” for his role in the matter.

According to an exclusive by PremiumTimes, prosecutors in Milan, Italy, have written to Nigeria’s Attorney General, Abubakar Malami, seeking the presence of Mr. Abubakar in criminal proceedings
relating to the Malabu scandal.

The Italian request contained in a letter of notification to Mr. Malami are also connected to the recent nine-count charge filed by the EFCC against Mr. Abubakar, and eight others for their roles in the scandal.

Apart from Mr. Abubakar, others being prosecuted by the EFCC include a former Attorney General, Mohammed Adoke; former petroleum minister, Dan Etete; Malabu oil and Gas; and five other shady companies controlled by Mr. Abubakar.

It was to Malabu oil and gas, a company whose roots is marred in corruption, that the Nigerian government in 1998 controversially allocated OPL 245, considered Africa’s richest oil block.

PREMIUM TIMES had reported how Mr. Adoke and former finance minister, Yerima Ngama, approved the transfer of about $1.1 billion from Nigerian government’s account in London into Malabu accounts controlled by Mr. Etete.

The money was paid by oil giants, Shell and ENI, ‎into a federal government account, for OPL 245, estimated to contain 9 billion barrels of crude.

Only $801 million of the money could be transferred to Mr. Etete due to legal issues raised by Emeka Obi, a businessman who is also being charged by the Italians, in a British court.

After the transfer to Mr. Etete, over half of the money was paid to the accounts of the five shady companies controlled by Mr. Abubakar.

Investigations by authorities in Nigeria, UK, and Italy have found Mr. Abubakar – described by anti-corruption officials as ‘Mr. Corruption’ for his involvement in various questionable high profile deals – and others culpable in the scandal.

Mr. Abubakar is believed to have acted as a front for several politically exposed persons who  benefitted from the funds including Mr. Adoke and Roberto Casula, who was then the head of Eni’s business operations in sub-Saharan Africa.

The letter seeking Mr. Abubakar’s presence in Italy, as well as another letter, containing the charge against him, were jointly written by prosecutors in Italy’s Directorate of Criminal Justice, the office of International Judicial Cooperation and the Italian ministry of foreign affairs.

The purpose of the letters is to inform the accused, owner of the luxurious building beside Transcorp hotel, Abuja, and the Nigerian government of the allegations against the controversial businessman.

According to the letters, dated October 14 and 15, Mr. Abubakar is expected to avail himself in Italy for trial.

In the “Notice of Proceedings,” the Italians stated that
“Aliyu Abubakar. No. 32 Gana Street, Maitama Abuja (Nigeria) is hereby notified that criminal proceedings are pending against him at this Public Prosecutor’s Office for the following offence: International corruption with the aggravating circumstance of transnationality. Re. OPL 245.”“Aliyu Abubakar is hereby requested to declare its domicile in Italy or to choose a domicile in Italy in order to be able to receive the notifications regarding the proceedings.”The letter of notification was signed by an Italian director of foreign affairs, Stefano Opillo, while the notice of criminal proceedings against Mr. Abubakar was contained in a letter signed by Milan’s public prosecutors, Fabio de Pasquale and Sergio Spadaro.

Mr. Abubakar could not be reached on Friday. Also, the spokesperson to Attorney General Malami, Salihu Isah, did not return calls or reply text messages sent to him on whether Nigeria would honour the Italian’s request.

Nigeria is, however, expected to ensure Mr. Abubakar’s availability to the Italians even it means extraditing him should he decline to make himself available voluntarily.