Fayose Blasts Clerics Over Impeachment Prophecies: Negative Prophecies Against Me Will Fail


Ekiti State Governor, Mr Ayodele Fayose, on Sunday lashed out at some clerics who had predicted that he would be impeached or removed from office in less than a year after his assumption of office. 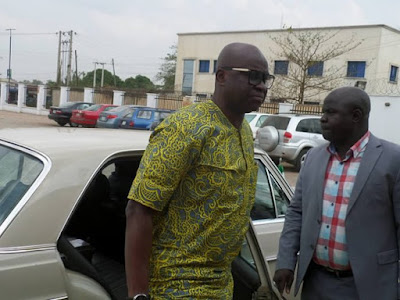 Fayose said negative prophecies against him will always fail because he is God’s project whose destiny is only determined by God.

According to a release by the governor’s Chief Press Secretary, Mr Idowu Adelusi, on Sunday, Fayose, also warned his aides against betrayal or subversive actions, saying whoever does that would
only have himself to blame.
“God knows everything and for Ekiti and her people, we are going forward and with God all things are possible. In January this year, a cleric said I would be removed in 2016 and I am still here by God’s grace. On April 22, 2015, somebody said myself and Governor Olusegun Mimiko of Ondo State would be removed from office, but I am still here.Fayose declared in Ado-Ekiti during the annual Christmas Carol Service at the Government House, that whatever God has purposed for him could not be altered by mere wishes of men.
“My enemies can’t change my destiny. I am God’s project and all that he plans for my life will come to pass, no matter how bitter some people feel. Anybody with a negative prophecy against me and this state will fail. We won’t lose any battle in Ekiti.God is bound by His words and will accomplish them,” he said.