Real Owner Of Naijagistlive Speaks Out, Denies Matharoo Sisters Are Behind Site


Speculations ran rife yesterday that the Indian Matharoo sisters Jyoti and Kiran Matharoo are the real owners of the controversial website Naijagistlive.

This is coming after the sisters were arrested reportedly because one of their accomplices was traced out and he led investigators to the sisters.

A statement from an old time friend and alleged victim of the sisters' libels, @PamMacB, on Instagram yesterday also fueled the speculations that the Indian Matharoo sisters Jyoti and Kiran Matharoo are the real owners of the controversial website Naijagistlive.

According to the old time friend, she was 100% sure Naijagistlive was being run by Jyoti and Kiran
Matharoovia because when she met them in London, the sisters had discussed their genius plan of writing an expose about their wealthy Nigerian clients and perhaps making money from it.

This old time friend also claimed that when she revealed details about herself, her daughter, how well her business was doing, the Matharoo sisters made up stories about her and perpetuated this awful rumor that she was an escort. Hundreds of comments from people calling her daughter disfigured, insulting her, publicly shaming her for things that she has never had any part in poured in and left her devastated.

The real owner of Naijagistlive has reacted and says  it drives him/her crazy to see these 'olodos' constantly credit her/his brilliant work to all these random people.

That if the Matharoo sisters Jyoti and Kiran were arrested it was for selling yansh, prostitution. And that she/he hopes chubby loud mouth yansh marketeer midget @PamMacB and her horse face sister are next.

Read below:
Today has been. . . eventful 🐸.Apart of me wanted to remain silent about the BREAKING NEWS that I’m no longer SDK or Baudex, and that I’m now the Matha-whore twins. I must admit, it drives me crazy to see these olodos constantly credit my brilliant work to all these random people. If the Matha-whore twins were arrested it was for selling yansh.  Let’s all hope chubby loud mouth yansh marketeer midget @PamMacB and her horse face sister are next.   I’ve been working on upgrading the sites servers to handle all the traffic NaijaGistLive has been getting. We’ve been dealing with DDOS attacks for the past few days as well. 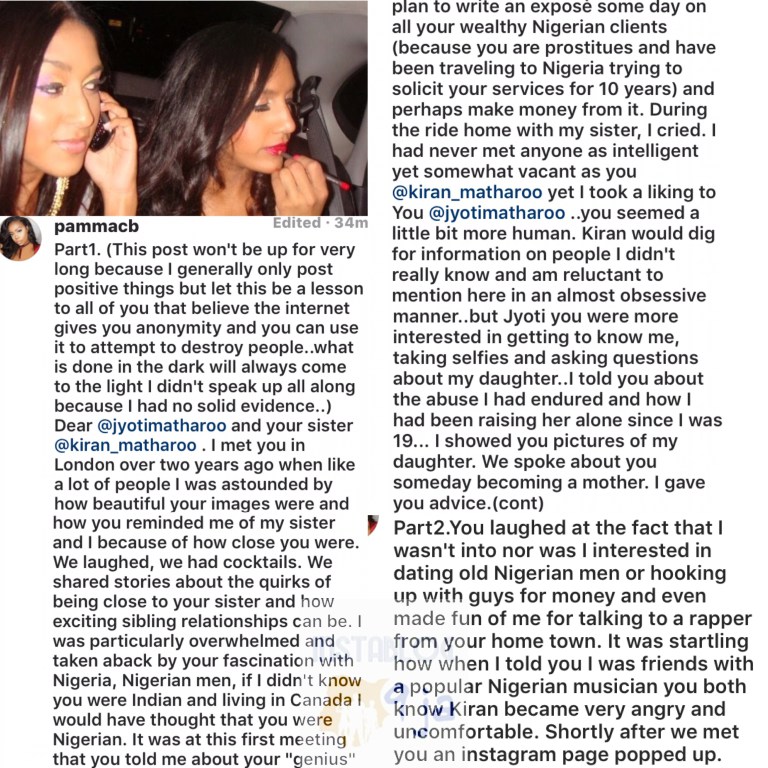 Anonymously posting malicious stories about anyone and everyone in Nigerian society. That page gained steam and turned into the website popularly known as naijagistlive.. the website that destroyed families, was a platform for false news , malicious rumors, lies and sheer evil.
.
.
I told you how well my business was doing and each story became worse and worse in an attempt to I guess extort money from me. After the 5th story I knew it was YOU behind the website. .
.
You knew my weak spot was my daughter and I would defend her with my life so you would write things that would make people question my motherhood and in turn leave evil cruel comments. .
.
You made up stories about me and perpetuated this awful rumor that I was an escort and saw the hundreds of comments from people calling my daughter disfigured, insulting me, publicly shaming me for things that I have never had any part in and when you heard me crying you sent me messages Jyoti, you told me to be strong, you told me to be strong for my daughter YOU SICK DISGUSTING BITCH. .
.
After going under the knife to transform yourselves into what can only be described as the reason it is necessary for people to have psychological evaluations before surgery, you spent your summer following around the very rapper you laughed at me for associating with. .
.
You watched people wish death on me and my daughter and you continued. You didn’t stop. How could you be so cold. You sociopathic, deranged lunatics. I prayed psalm 35 everyday night and day after your last story and even cried on my Snapchat , after feeling helpless and broken. .
.
You bullied me. You made a mockery of me publicly and I asked God to vindicate me and to punish you. Your greed and obsession with material things has been your down fall. I hope you get EXACTLY what you deserve and are dealt with good and proper. You bitches should have stuck to escorting.. LOOK AT GOD.”